Ethiopia Convicts 10 for Links to al-Qaida 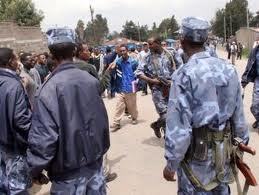 An Ethiopian court on Tuesday convicted ten people of having links to al-Qaida, including leading "terrorism cells," and of laundering money.

"We have found them guilty," said judge Bahru Darcha.

The convicts, who included one Kenyan, were charged in April under Ethiopia’s anti-terrorism legislation with having links with Islamist extremists, the first trial in Ethiopia for al-Qaida suspects.

All but the Kenyan pleaded not guilty.

While the crimes carry a maximum penalty of death, prosecutors requested a sentence of life in prison. Defense lawyers said they would appeal.

The court will hand the convicts their sentence on January 15.

Rights groups have criticized Ethiopia’s anti-terrorism law for being vague and used to stifle peaceful dissent.

Since introduced in 2009, all people accused under the legislation have been found guilty, including two Swedish journalists who were jailed last year and pardoned in September.