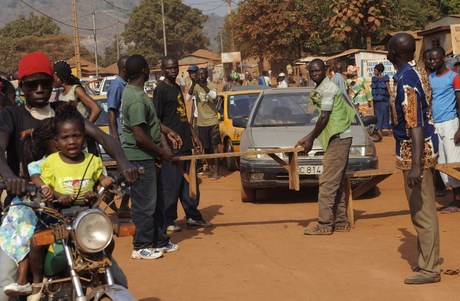 The prospect of a rebel takeover of the Central African capital Bangui dimmed Tuesday as the regional bloc sent troops to prop up the regime of President Francois Bozize and force peace talks.

With the Seleka rebel coalition threatening to march on the capital, Gabon, Congo-Brazzaville and Cameroon have each pledged 120 troops to join 400 Chadian soldiers already deployed by multinational African peacekeeping force FOMAC to protect the key town of Damara, according to a FOMAC source.

Damara is the last strategic settlement between the rebels and Bangui, after Seleka seized much of the chronically unstable country in a three-week advance to within 160 kilometers (100 miles) of the capital, which sits on the southern border with the Democratic Republic of Congo.

Bangui itself was rocked by deadly clashes Tuesday after police killed a young Muslim man suspected of links to the rebels, according to a police source. The man, who was arrested overnight, was shot down when he tried to escape, the source said.

He said the man's death had sparked clashes that killed a policeman and added that tension remained high in the PK 5 neighborhood, which has in recent years been shaken by violence between Christians and Muslims.

The Seleka rebellion is seen by many people in the 85-percent Christian country as being Muslim-dominated, and there are likely many Muslims in the rebels' ranks, according to analyst Roland Marchal, a specialist in central African conflicts at the Paris-based National Center for Scientific Research.

The central African military reinforcements were sent in after the rebels vowed on Monday to take Damara, which sits about 75 kilometers north of the capital.

Some of the 120 Gabonese troops arrived on Tuesday morning in Bangui, with most of the rest expected by the end of the day, the FOMAC source said.

The 120 troops from Congo-Brazzaville arrived on Monday, while the Cameroonian contingent is expected by the end of the week.

A Gabonese general will command the full force of 760 foreign troops in Damara, the source said.

In a nationally broadcast New Year's address, Bozize thanked his Chadian counterpart, President Idriss Deby, for sending in troops to protect his regime.

"Thanks to the Chadian army you are listening to me on the radio and watching me on television," he said.

"Otherwise, we would all be in the bush. Bangui would be empty today and embroiled in unrest. Thanks to the Chadian army, thanks to President Idriss Deby Itno of Chad."

Bozize also repeated his promise to hold talks with the rebels.

"I am ready for dialogue. I am waiting for the heads of state (of regional bloc CEEAC) to set the date so we can go there in agreement with Seleka to find the path to exit from this crisis," he said.

Rebel spokesman Eric Massi said on Monday that Bozize could not be trusted, renewing the rebels' call for him to stand down.

But as thousands of Bangui residents flocked to churches on Tuesday, a traditional day of prayer, the capital's Catholic archbishop, Dieudonne Nzapalainga, said some of the rebels were ready to negotiate with the government.

"I have begun hearing messages of hope from the president and rebels," he told AFP, adding that some rebels had said they were ready for talks.

Yves Enza Betilamba, a worshipper at a local church, said she was praying for peace.

"We came to pray to God to protect us during this unrest that is unfolding in our country. We pray for peace. God has not abandoned the Centrafricans."

The United States said on Monday that it was deeply concerned over the security situation in the country and called on the rebels to halt their advance.

State Department spokeswoman Victoria Nuland added that the U.S. was also concerned by the "arrests and disappearances of hundreds of individuals who are members of ethnic groups with ties to the Seleka rebel alliance".

A FOMAC official hinted it was unlikely the rebels would attempt to muscle past regional forces and seize Damara. "The rebels known that this is a red line."

A foreign expert who did not wish to be named but has followed the situation closely argued that the developments of the past two days had made a rebel attack on Bangui a more distant prospect.

"They are probably divided by now," he said, explaining that some had come to the realization that an offensive on Damara against allied Chadian and Central African troops was a risky affair.