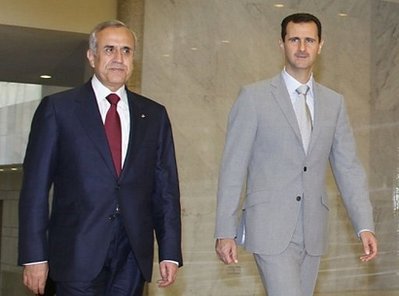 The Syrian regime has distanced itself from President Michel Suleiman over his indirect criticism of the Syrian ambassador for using the foreign ministry as a launchpad of verbal attacks against Lebanese officials, pan-Arab daily al-Hayat reported on Thursday.

The newspaper quoted official Lebanese sources as saying that Damascus has expressed frustration over Suleiman's recent comments that diplomats should abide by the protocol and the foreign ministry should reject being used as a forum for accusations launched against political leaderships.

In the first letter, Ali said that his mission had received complaints from Syrian refugees claiming “extremist Salafist organizations” were demanding that they declare their opposition to the Assad regime in return for aid through the U.N. High Commissioner for Refugees.

The ambassador accused the social affairs ministry of being responsible for the pressure exerted on the displaced.

Social Affairs Minister Wael Abou Faour revealed on Tuesday that Ali reiterated in a second letter the accusations that the ministry was distributing aid to refugees disproportionately.

Abou Faour said he will make an appropriate response to the two letters soon.

Al-Hayat's sources said the recent controversy that erupted over Ali's letters and Suleiman's instructions to Mansour further exacerbated already strained ties between the Lebanese president and the Syrian leadership.

Their “relations are undergoing a more than one-year crisis which erupted when (Lebanon) snapped back at a complaint made to the U.N. Security Council by the Syrian envoy, Bashar al-Jaafari,” they said.

Al-Jaafari said in his letter in May last year that some Lebanese areas near the Lebanese-Syrian border have become an incubator for terrorist elements from the al-Qaida and the Muslim Brotherhood organizations.

The letter claimed that there were arms depots in Lebanon’s border areas, noting that the weapons are being shipped by sea or on planes to Lebanon with the aim of smuggling them to Syria.

Source Reuters: 13:32 Assad was serious injured during a rcoket attack on his palace.

We Never had Syrian ambassador or any Syrian Diplomatic representative in Lebanon for decade why do we need one today ? Just send the Syrian Ambassador back to Syria and closed this stupid Embassy in Beirut , We do not need a Diplomatic Relations with a Country killing it's own People .

abu ahlid. Assad's death would not change the course of events. If anything the Allawites will fight even more desperately. PS Reuters is a propaganda arm of the British government. It has no problem with, or real journalistic standards regarding, the dissemination of disinformation.