Iraq Orders Release of 11 Female Detainees after Wave of Protests 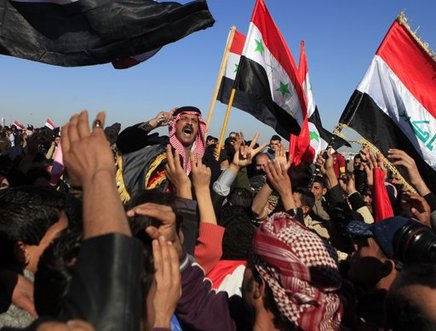 Iraqi authorities on Thursday ordered the release of 11 female detainees facing criminal charges and vowed to transfer women prisoners to jails in their home provinces, in a move that addresses one of the main demands of a wave of protests by the country's Sunni minority against the Shiite-led government.

The demonstrations erupted nearly two weeks ago following the arrest of bodyguards assigned to Finance Minister Rafia al-Issawi, one of the central government's most senior Sunni officials. The protests, however, tap into deeper Sunni grievances of perceived discrimination by Shiite Prime Minister Nouri al-Maliki's government.

Justice Ministry spokesman Haider al-Saadi said the female detainees' families can secure their relative's release by paying bail. He added that 13 Sunni women convicted of criminal charges will be transferred from a Baghdad jail to other prisons in their home provinces of Anbar, Salahuddin and Ninevah to complete their sentences there.

A day earlier, Iraqi Prime Minister Nouri al-Maliki said he asked the judicial authorities to accelerate efforts to resolve the cases of the detainees, adding that a special committee was formed to end the issue of female prisoners.

The detention of female prisoners has been a focus of the demonstrations, but it was not clear whether the decision to release some of them will appease the protesters. The demonstrations are also driven by Sunni grievances of perceived second-class treatment by the central government and what they see as the unfair application of laws against their sect.

Vice President Tariq al-Hashemi, another high-ranking Sunni official, is now living in exile in Turkey after being handed multiple death sentences for allegedly running death squads— a charge he dismisses as politically motivated.