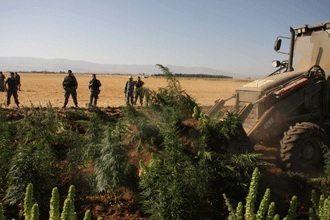 As Lebanon continues to overlook the potential to turn its cannabis cultivation problem into a profitable project that can improve the living conditions of farmers in the Bekaa region, many farms in Israel are challenging the illegality of marijuana in the state to test and promote its medical advantages.

“Situated in the Galilee hills in northern Israel is a government-approved medical marijuana farm that among its strain of growing plants there is one that is believed to have the strongest psychoactive effect of any cannabis in the world. Another, rich in anti-inflammatory properties, will not get you high at all,” the New York Times reported.

Israelis have been “at the vanguard” of research into the medicinal properties of cannabis for decades, the newspaper added.

In Lebanon the Ministry of Interior embarked in August 2012 on a mission to destruct cannabis crops in the town of al-Yammouneh in the eastern Bekaa valley, home to over 30,000 dunums of cannabis crops. The mission often causes armed clashes between the Lebanese army and the farmers who claim it is their only source of income.

While the ministry has repeatedly promised finding and encouraging a substitute type of agriculture to replace cannabis, no other solution has been introduced.

“Why not do it the Turkish way?” Interior Minister Marwan Charbel had suggested.

“The government would take the produce and sell it abroad for medical and agricultural use. We must resolve this issue because the people of this region cannot grow different types of plants in their land,” he added.

The New York Times reported that researchers in Israel say cannabis can be beneficial for a variety of illnesses and conditions, from helping cancer patients relieve pain and ease loss of appetite to improving the quality of life for people with post-traumatic stress disorder and neuropsychological conditions. The natural ingredients in the plant, they say, can help with digestive function, infections and recovery after a heart attack. The strain known as Eran Almog, which has the highest concentration of THC, is recommended for severe pain. Avidekel, a strain rich in CBD and with hardly any psychoactive ingredient, allows patients to benefit from the drug while being able to drive and to function at work.

Israel’s Ministry of Health issues special licenses that allow thousands of patients to receive medical marijuana, and “some government officials are now promoting the country’s advances in the field as an example of its pioneering and innovation”.

“I hope we will overcome the legal obstacles for Tikkun Olam and other companies,” Yuli Edelstein, the minister of public diplomacy and diaspora affairs, told journalists during a recent government-sponsored tour of the farm, part of Israel’s effort to brand itself as something beyond a conflict zone. In addition to helping the sick, he said, the effort “could be helpful for explaining what we are about in this country.”

Yet experts say that many medical professionals in Israel remain skeptical and are reluctant to encourage patients to use marijuana, be it because of conservatism or a lack of knowledge about its potential benefits. Obtaining a personal-use license from the Health Ministry for a patient requires a special effort by doctors and can take more time than some patients have.

This is just one of the many fields in which Lebanon could get Israeli aid, if only it wanted. Another being the natural gas lying off the coasts of the two countries.

I am not offering you my help from here in the UK. All I suggested was that when looking at the Middle East scene from outside the cauldron of that area, Israel and Lebanon seem to have a lot more in common than most people think.

You do not need to "Beg" the Israelis for anything.However you may be surprised to know that not all Israelis are so terrible.Many of us would love to have peace in our region with the exchange of help and information.