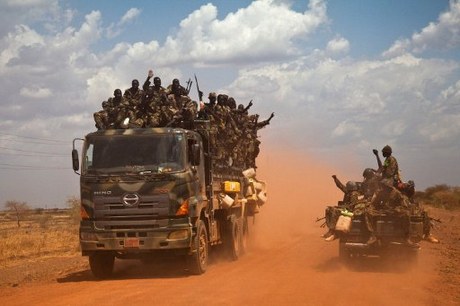 Sudanese troops clashed with South Sudanese forces along their restive border, South Sudan's army said Thursday, a day ahead of planned talks between the presidents of the two rival nations.

"They attacked on Wednesday, and the fighting continued until late in the afternoon.... It is a remote region so we are still awaiting updates on casualties," he said.

United Nations peacekeepers could not confirm the reports and the claims could not be independently verified.

Sudanese army officials could not immediately be reached.

The accusations come ahead of a meeting scheduled for Friday between Sudanese President Omar al-Bashir and South Sudan's Salva Kiir, to push stalled economic and security deals, including a demilitarized border buffer zone.

"The talks will still take place as planned, we have given our word and we are committed to them," Benjamin told AFP.

"Our chief negotiator Pagan Amum is already in Addis Ababa.... This summit is important because we want to ensure the full implementation of the agreements we have already signed."

"President Bashir will leave tomorrow morning to the Ethiopian capital Addis Ababa for a two-day visit. He will meet with the president of South Sudan, Salva Kiir, to discuss the pending issues and to speed up implementation of the cooperation agreements signed by the two presidents last September," SUNA reported Thursday.

The claims of attacks will add to tensions between the former civil war foes, who are meeting for the first summit since they signed agreements in September that have not been implemented.

"The ground attacks took place some 40 kilometers (25 miles) inside South Sudan's territory, but they were repulsed," South Sudan's information minister said, although the frontier is disputed in many places.

"Antonov aircraft also dropped bombs further inside.... There were casualties, including civilians, women and children, but we are still awaiting reports of the exact number," he added.

Along with the buffer zone, the September pacts allowed for a resumption of South Sudanese oil exports through northern pipelines. They also said border points would be reopened for general trade.

South Sudan separated from Sudan in July 2011 under a peace agreement that ended a 1983-2005 civil war, but key issues including the demarcation of hotly contested border zones remain unresolved.

Khartoum accuses the South of supporting rebels operating in Sudan, which has been a major obstacle to implementing the agreements.