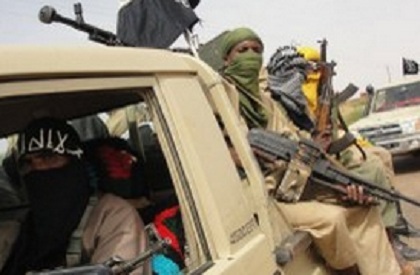 One of the armed Islamist groups occupying northern Mali, Ansar Dine, said Thursday it was revoking a pledge to end hostilities made last month during peace negotiations in Algeria.

"Ansar Dine (Defenders of the Faith) has decided to revoke the offer to stop hostilities together with the negotiations being conducted in Ouagadougou," said Ansar Dine's leader, Iyad Ag Ghaly, in a statement published by Mauritanian news agency Sahara Medias.

The Ouagadougou talks are being led by Burkina Faso President Blaise Compaore, west Africa's chief mediator for the crisis in Mali, where Islamists seized control of the north in the wake of a March 22 coup.

The Ansar Dine statement lashed out at the Malian government, saying it had given nothing in return for the promise to end hostilities and was instead busy "recruiting mercenaries" to fight in the north of Mali.

The U.N. Security Council on December 20 approved the deployment of an international force in Mali to reclaim the north, but did not give a precise timetable and said the troops should be sent in stages.

The Security Council also insisted on the need for dialogue with armed groups in the north that reject terrorism and the partition of the country.

The day after the Council's decision, Ansar Dine and another armed group in the north, the ethnic-Tuareg separatist movement MNLA, announced they were ready to put down their weapons and negotiate with the Malian transitional government.

Ansar Dine's leader said Thursday that the pledge to end hostilities had been "torn out" of his delegation during "rough negotiations".

He said he was still open to "new negotiations, even if (Ansar Dine) has never detected a willingness from the other party to reciprocate".

Islamist groups, some with al-Qaida links, seized northern Mali in the wake of the March coup, and have since imposed a brutal form of sharia, or Islamic law.

Their occupation of the Texas-sized territory has raised fears the groups could use the north as a base to launch attacks on the region and Europe.

Mali's interim president said Monday that his administration could not wait several months before launching an offensive to retake the north.

"I can tell you one thing: Mali will not wait months, as some seem to advocate. We will not wait for the cancer to spread," Dioncounda Traore said in a New Year address.

"The war against the terrorists will happen sooner than expected and the Malian army will be at the forefront," he said.

Under pressure from Burkina Faso and Algeria, Ansar Dine has also announced it no longer wants to impose sharia across Mali, saying it will limit itself to applying the strict Islamic law in territory under its control.

Witnesses say the harsh application of sharia has continued unabated in the north.

On Wednesday a woman accused of having sex out of wedlock was publicly beaten until she fainted and had to be taken to hospital.