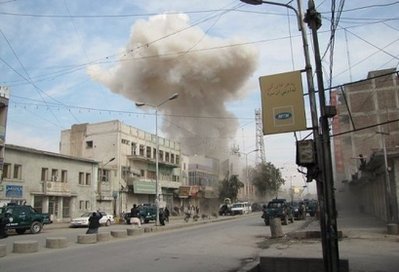 Two suicide bombers struck a meeting of community leaders in a southern Afghan town near the Pakistan border on Sunday, killing at least five people and wounding 15, officials said.

One gunman on foot opened fire on guards at the entrance of the council building in Spin Boldak, forced his way inside and detonated himself, while a second attacker rammed an explosives-laden vehicle into the outside walls.

The Kandahar provincial government said that the dead were a child, a health vaccinator, a member of the shura (council), a shopkeeper and a person there to register himself for an identity card.

"All the wounded were civilians who had come to the meeting to discuss their problems with shura members," it said in a statement, adding that three people were being treated for serious injuries in Kandahar city hospital.

The building partially collapsed due the impact of the blasts, with some of the injured pulled from the rubble during a search operation to check for buried bodies.

"Every Sunday the local shura meets at the administrative building, that is where the attack happened," said Mohammad Ali, the border police chief.

About 40 residents were attending the meeting to lodge complaints with tribal elders or to petition them for assistance.

The Taliban have waged a bloody insurgency against foreign and Afghan forces since being ousted from power in a 2001 invasion led by the United States.

Spin Boldak sits on the road from Kandahar, birthplace of the Taliban movement, to the Pakistani city of Quetta, where the fugitive leaders of the insurgency are widely thought to mastermind many attacks.

The last major suicide blast in Afghanistan occurred on December 26 at a U.S. military base near the eastern city of Khost, killing at least three Afghans and wounding seven others.

It came two days after an Afghan policewoman shot dead a U.S. NATO adviser in Kabul police headquarters, the latest "insider" attack by a member of Afghanistan's security forces on their foreign allies.

NATO is handing over security duties to Afghan forces as it prepares to withdraw the bulk of its 100,000 troops by 2014, but there are fears the country will descend into civil war when foreign soldiers leave.

President Hamid Karzai travels to Washington this week for talks with President Barack Obama on a bilateral security pact, with the issue of some U.S. troops remaining in Afghanistan after 2014 high on the agenda.

The Taliban on Saturday warned of a prolonged war if any foreign troops are left as a "residual force", though U.S. media reports say that between 3,000 and 9,000 troops are likely to stay on to target militants.