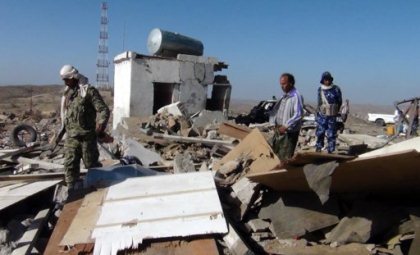 A Yemeni court specializing in terrorism cases sentenced five Yemenis to between four and 10 years in prison Sunday on charges of membership in Al-Qaida and for plotting to carry out terrorist attacks.

Key defendant Mohammed Muawada was jailed for 10 years while three accomplices were given a 6-year prison sentence each and the fifth one was sentenced to four years in jail, according to the verdicts announced by judge Hilal Mahfal.

Four other suspects were released on parole while two were set free.

All 11 had been arrested on charges of "membership in Al-Qaida" and "plotting to attack vital installations, military camps, foreign embassies" as well as security officials across Yemen.

Until recently, Al-Qaida militants held large swathes of territory in the country's south, but after a month-long government offensive that ended in June, most have fled to the more lawless desert regions of the east.

Though weakened, the militants continue to launch hit and run attacks on government and civilian targets throughout Yemen.