Cameron Says Britain Would Fight to Keep the Falklands 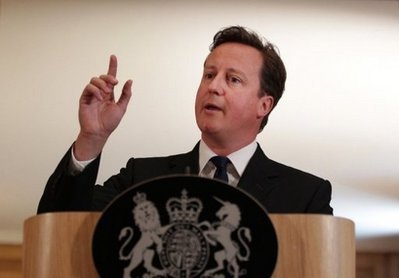 Prime Minister David Cameron said Sunday Britain was prepared to fight militarily to keep the Falkland Islands if necessary, in the face of renewed Argentinian rhetoric over their future.

Cameron said Britain had "strong defenses" in place on the islands and fast jets and troops were stationed there.

President Cristina Kirchner said this week that Argentina was forcibly stripped of the Falklands by Britain in "a blatant exercise of 19th-century colonialism" and demanded they be handed over to Argentina.

Cameron insisted he was "absolutely clear" that Britain would defend the islands with military force.

In an interview on BBC TV, he said: "I get regular reports on this entire issue because I want to know that our defenses are strong, our resolve is extremely strong."

Asked whether Britain would fight to keep the islands, he replied: "Of course we would, and we have strong defenses in place on the Falkland Islands, that is absolutely key, that we have fast jets stationed there, we have troops stationed on the Falklands."

Cameron said this week that the 3,000 residents of the Falklands had a strong desire to remain British and would have a chance to express their views in a referendum on their political status to be held in March.

The islanders are expected to vote strongly in favor of continued union with Britain.

Census data released in September showed that 95 percent of residents considered themselves to be either Falkland islanders, British, or from Saint Helena, another British overseas territory in the South Atlantic.

Argentina invaded the Falklands in 1982, prompting Britain's then prime minister Margaret Thatcher to send a naval taskforce to successfully reclaim the islands in a war that claimed the lives of 255 British and 649 Argentinian soldiers.

I think it is time for colonialism revival.