Obama Back at White House after Hawaii Vacation 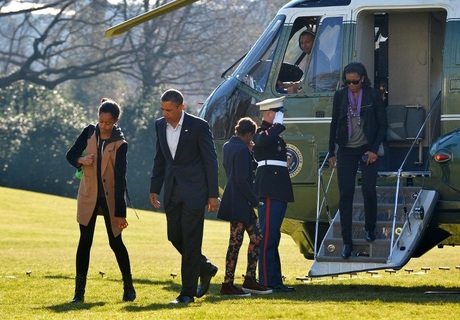 U.S. President Barack Obama and his family arrived back at the White House on Sunday after spending their Christmas vacation in his native Hawaii.

Obama, the first lady and their daughters touched down at Andrews Air Force Base outside Washington aboard Air Force One shortly after 11:00 am local time (1600 GMT) before riding a helicopter back to the White House.

Obama, wearing a white shirt and a blue blazer, placed his arm around eldest daughter Malia as the first family descended from Marine One helicopter onto the White House lawn in bright winter sunshine.

The president began his vacation on December 21, but was forced to interrupt it on December 26 and fly back to Washington to pressure lawmakers to forge a deal to avert the so-called fiscal cliff.

After an 11th hour accord was reached that saw taxes rise on only the richest Americans but delayed decisions on spending cuts for a further two months, Obama returned to Hawaii on January 2.

U.S. media is reporting that the president will announce on Monday that he is nominating Chuck Hagel, a Republican and former U.S. senator from Nebraska, to succeed Defense Secretary Leon Panetta at the helm of the Pentagon.

Obama has signaled early second term efforts on gun control and immigration reform after being sworn in at his inauguration in two weeks time.