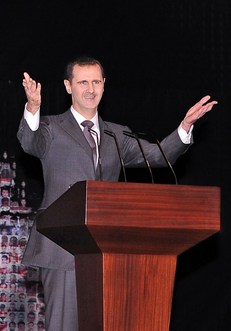 Syrian President Bashar Assad accused Palestinian groups he did not identify on Sunday of treating the country like a "hotel", in his first public speech in seven months.

Assad praised every "honorable Palestinian in Syria who has served (the country's interests alongside) his Syrian brother and not treated Syria like a hotel, leaving it when circumstances become difficult."

His comments appeared to be an allusion to Islamist group Hamas which had its headquarters in exile in Damascus before quietly moving abroad and declaring its support for the uprising against Assad.

Syrian members of the Muslim Brotherhood movement, from which Hamas sprung, were among the first to participate in the revolt when it erupted in March 2011.

You should call it Hotel California. You can check in but you cannot get out.

this guy is still talking? amazing

some Hotel...you get airstrikes if you are palestinian and live in a refugee camp in Syria...