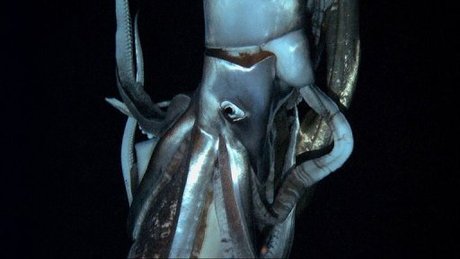 Scientists and broadcasters said Monday they have captured footage of an elusive giant squid up to eight meters (26 feet) long that roams the depths of the Pacific Ocean.

Japan's National Science Museum succeeded in filming the deep-sea creature in its natural habitat for the first time, working with Japanese public broadcaster NHK and the U.S. Discovery Channel.

They spotted the squid at a depth of 630 meters (2,067 feet) using a submersible in July, some 15 kilometers (nine miles) east of Chichi island in the north Pacific Ocean.

The submarine with three people on board, including Tsunemi Kubodera from the museum, followed the enormous mollusc to a depth of 900 meters as it swam into the ocean abyss.

NHK showed footage of the silver-colored creature, which had huge black eyes, as it swam against the current, holding a bait squid in its arms against the backdrop of dark oceanic depths.

The creature was about three meters long, but "estimated to be as long as eight meters if its two long arms had not been chopped off", Kubodera told Agence France Presse.

He gave no explanation for its missing arms.

He said it was the first video footage of a live giant squid in its natural habitat -- the depths of the sea where there is little oxygen.

Kobudera, a squid specialist, also filmed what he says was the first live video footage of a giant squid in 2006 but only from his boat after it was hooked and brought up to the surface.

The giant squid, "Architeuthis" to scientists, is sometimes described as one of the last mysteries of the ocean, being part of a world so hostile to humans that it has been little explored.