Troops Repulse Attack in Aleppo as Fighting Rages around Damascus 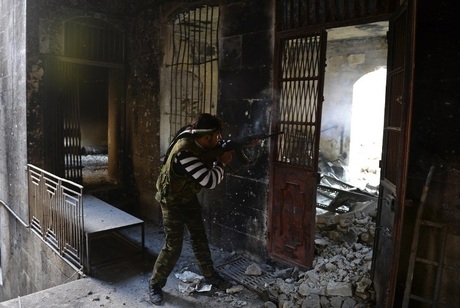 Syria's state media said Monday that government troops repulsed a rebel attack on a police school in the northern city of Aleppo, one day after President Bashar Assad called on Syrians to fight an opposition driven by what he characterized as religious extremists.

The official SANA news agency said regime forces killed and wounded members of a "terrorist group" in the fighting late Sunday, but did not provide a number. The government and the pro-regime media refer to the rebels seeking to topple Assad as terrorists.

Aleppo, Syria's largest city and a former commercial hub, has been a major front in the civil war since July, with battles often raging for control of military and security facilities such as the police school. Rebels have recently made gains around Aleppo, as well as in the east and in the capital Damascus, bringing the civil war closer to the seat of Assad's power.

The Britain-based Syrian Observatory for Human Rights said rebels clashed with troops in the suburbs of Damascus, including in Daraya south of the capital. The Observatory said the army sent reinforcements there to join in an offensive aimed at dislodging rebels from the district, located just a few kilometers (miles) from a strategic military air base west of the capital.

The towns and cities around Damascus have seen relentless fighting in recent weeks as rebels try to push through the government's heavy defenses in the capital. The regime has responded with withering counterattacks that include barrages by artillery and warplanes. The Observatory also reported clashes in the eastern province of Deir Ezzor, in the central region of Homs and in the southern province of Daraa, the birthplace of the uprising in March 2011.

Five people, including four members of the same family, were killed in shelling on the eastern Damascus suburb of Kfar Batna, the Observatory said.

In the eastern city of Deir Ezzor, one soldier who had defected was killed in fighting near a local political security branch office.