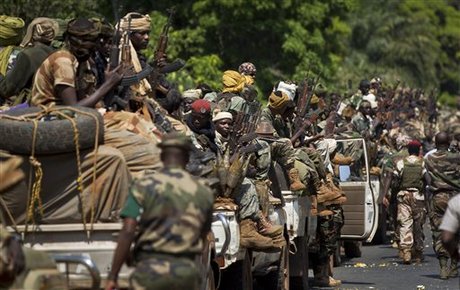 President Francois Bozize of the Central African Republic flew Monday to the Republic of Congo for talks with his Congolese counterpart, who will mediate negotiations between Bangui and a rebel alliance, an Agence France Presse journalist said.

Bozize "should return in the afternoon" after consulting President Denis Sassou Nguesso, a government source said. The Congolese president was due to mediate in peace talks set to open Tuesday in Gabon's capital Libreville.

The Seleka alliance of three rebel movements took up arms on December 10 in northern CAR and has since moved steadily southwards, taking a string of towns, to stop within striking distance of Bangui.

The rebels initially called on the Bangui government to respect the terms of peace accords signed in 2007 and 2011, but have since upped their demands to include the departure of Bozize.

The Economic Community of Central African States (CEEAC) hopes to host negotiations between the rebels and Bozize in a bid to end the crisis in the mineral-rich but very poor landlocked state.

CEAAC has sent more troops to strengthen its military intervention force in the CAR, known as FOMAC, which is serving as a buffer force between the rebels and Bangui.

South Africa has also sent troops, announcing that about 400 men would be deployed "to render support in fulfillment of an international obligation". A rebel group on Monday accused Pretoria of "coming to the aid of enemies of the people" by sending "mercenaries".

The delegations had initially been expected on Sunday in Libreville but are now thought to be arriving Monday, a source close to the Central African presidency said. Once the talks were underway, Bozize would also travel to the Gabonese capital, the source added.

Eric Massi, the spokesman for Seleka, confirmed on Sunday that the rebels would attend talks, but asked for more time to prepare. The head of the rebels, Michel Djodotia, had "committed himself to going to Libreville", he said.

Central African Minister of Territorial Administration, Josue Binoua, said each delegation would have 15 members who would put "proposals for a way out of the crisis" to a committee led by Sassou Nguesso.