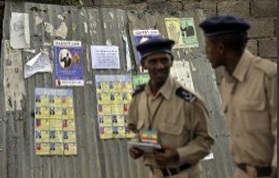 A 27-year-old Austrian tourist was killed in northern Ethiopia when his group was attacked during a whitewater rafting trip on the Nile, Austria's foreign ministry said Monday.

The victim was part of a group of 10 Austrians on an organized whitewater rafting trip in the region.

Four of the group had spent the night camping on the banks of the Nile when they were apparently attacked by robbers. The victim's three companions were unharmed in the incident.

"There were gunshots," Weiss told AFP.

One of the tourists "was mortally wounded, the three others managed to escape and called the Austrian embassy in Addis Ababa.

"The (local) authorities were later informed and we received information this morning that the three individuals were safe. Shocked but in safety," he added.

"Technical equipment was stolen, the boats were damaged. It was probably a band of bandits."

Weiss added the attack did not seem to have been political motivated, saying: "It was just a robbery."

No arrests have been made, the ministry spokesman said.

In its latest travel advice on Ethiopia, published in November, the Austrian foreign ministry warned of "a heightened risk of terrorist attacks".

In January 2012, five foreign tourists, including an Austrian, were killed on the slopes of the Erta Ale volcano in northern Ethiopia. Addis Ababa blamed the attack on groups trained and armed by neighboring Eritrea, an accusation the Eritrean government denied.