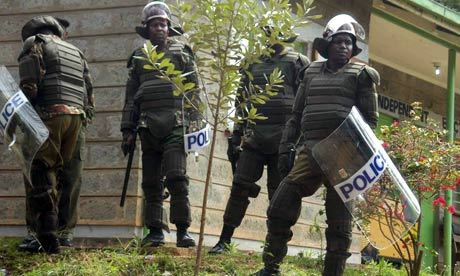 Four people, including three police officers, were wounded when a grenade was hurled at a police vehicle Monday in the northeast Kenyan town of Garissa, close to the Somali border, a police source said.

"A total of four people have been injured. Three are administration police," a Kenyan paramilitary police unit, a police officer in Garissa told Agence France Presse on condition of anonymity.

"A grenade was hurled on their vehicle" while the officers were on patrol, he added.

"We're gathering information on what happened in the incident," he said.

The attack comes after five police were killed in Garissa in November: two officers shot down while on patrol and three others killed by gunshots a few days later while changing a flat tire on their vehicle.

Kenya has been hit by a wave of grenade and gun attacks, often blamed on sympathizers of Somalia's Shebab Islamist fighters and sometimes aimed at police targets, since its army went into Somalia last year to flush out the Shebab.