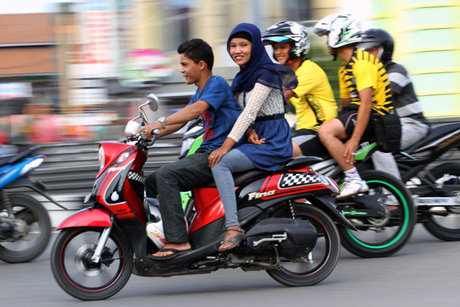 Rights groups urged the Indonesian government Tuesday to block a proposed law banning women from sitting astride motorcycles in deeply Islamic Aceh province, where the position is deemed "improper".

The mayor of Lhokseumawe city in Aceh, where sharia law is enforced, circulated a letter Monday explaining the obligation for women to sit side-saddle was "to avoid immoral acts".

"Adult women who are riding on the back of a motorbike... cannot straddle unless in an emergency," mayor Suaidi Yahya's letter read, adding that the ban included women straddling female drivers.

The official explained last week that women sitting astride motorcycles would "provoke the male driver" and that it would be against Islamic law.

The letter also proposed banning men and women from hugging and holding hands while on vehicles, and banning tight or scanty clothing in public.

The move comes after leaders from Aceh, the country's only province ruled by strict sharia law, drafted a series of new bills including banning women from wearing tight trousers, stoning adulterers and flogging homosexuals.

"Sitting astride guarantees better safety, and I'm sure most people can only side-saddle for 15 minutes. What if the person is overweight and causes an imbalance? It could cause an accident," she added.

National Commission on Violence Against Women activist Andy Yentriyani said the policy was "part of discriminative policies on women in this country in the name of religion and morality".

But the central government said it could not review the straddling ban because it was not yet formalized as a bylaw and did not include punishments.

Local media reported the interior minister saying he would review the bylaw if it passed.

But the ministry's regional autonomy director-general Djohermansyah Djohan, who would oversee any revision, said: "We'll just leave it to people of Aceh to decide whether to accept it or not."