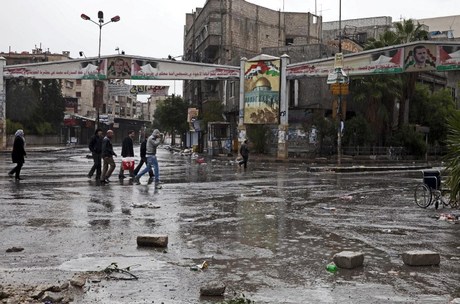 Pro-Damascus Palestinian groups in Syria said on Tuesday that Yarmuk camp in the south of the capital must be "demilitarized", and called on Palestinian factions to help refugees who fled camp violence to return home.

Violence has struck several refugee camps since March 2011, when the revolt erupted in Syria, which is home to some 490,000 Palestinians.

On Tuesday alone, five people were killed in shelling and sniper fire in Yarmuk camp, as clashes raged on its outskirts nearly a month after the outbreak of major fighting there.

"We call on armed men to withdraw from Yarmuk so the people of the camp can have a roof over their heads again, and put a stop to political strife in Yarmuk," said a statement issued at a press conference by factions allied to the regime of President Bashar Assad.

"The main goal is the return of residents to a safe, demilitarized camp, where they can go back to a normal life," the statement added.

The text was not signed by main factions Fatah, Hamas and Islamic Jihad.

Signatories called on Hamas and the Palestine Liberation Organization to launch an international campaign to enable the return of most of the 150,000 residents of Yarmuk, who fled when major violence broke out there in mid-December.

In late December, a PLO official said more than 700 Palestinians have been killed in Syria's violence.

Palestinians in Syria are divided over the country's conflict, with the PFLP-GC and its allies supporting Assad, while Hamas and others back the revolt.