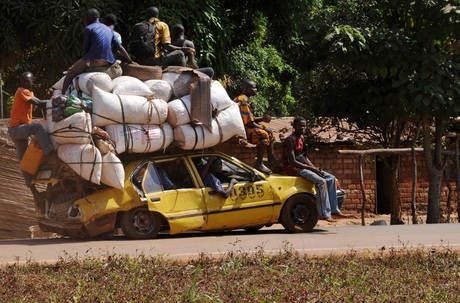 Hundreds of tonnes of food aid have been stolen from warehouses across the restive Central African Republic, the U.N.'s World Food Program lamented Tuesday.

The U.N. agency suspended its operations in the Central African Republic (CAR) late last month due to the security situation in the country amid a month-long rebel offensive.

Byrs said some 210 tonnes of food had been taken from a warehouse in the rebel-held north-central town of Kaga-Bandoro, where the WFP office and guest-house had also been attacked.

In Bambari, another rebel-held town in central CAR, a WFP warehouse had been looted and some 209 tonnes of food, including riche, oil, sugar and salt had been lost, while another seven tonnes of food aid had been taken from Bria in the east.

"No food remains in Bambari or Bria after the looting," Byrs said, adding that three WFP trucks had also been vandalized.

"It's impossible to confirm at this stage whether WFP's other sub-offices and warehouses have also been looted," she said, pointing out that "the situation is unpredictable."

So far, there had been no attacks on the warehouse in Bangui, which holds about 1,000 tonnes of food -- enough to feed some 300,000 people for a week, she explained.

Byrs said WFP was prepared to resume its operations in the mineral-rich but impoverished and coup-prone state as soon as the security situation improved.

A U.N. security assessment is currently under way in Bangui.

Negotiations between CAR rebels and President Francois Bozize were expected to start some time this week in the capital of Gabon in a bid to end the month-long crisis.

The Seleka rebel coalition launched an offensive on December 10 from the north and marched across much of the country before halting their advance 100 miles north of the capital.

They have demanded that the president should step down, something Bozize's office has flatly rejected.