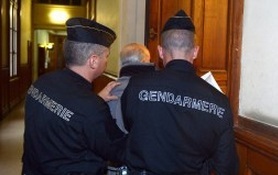 A French court handed down an eight-year jail term on Tuesday to a Turkish-Dutch man for masterminding a group that had funded the al-Qaida-linked Islamic Movement of Uzbekistan (IMU).

The Paris court also permanently banned Irfan Demirtas, 53, from France, where he had been held since shortly after his 2008 Dutch arrest on charges of financing terrorism.

Eight others arrested for belonging to the group, which had sent tens of thousands of euros to the IMU, received various sentences of up to three years in jail. A 10th co-defendant was acquitted.

Prosecutors said the France-based network sent at least 300,000 euros ($390,000) to the volatile border between Pakistan and Afghanistan, where the IMU is said to be active. They said 170,000 euros of that sum was earmarked for jihad.

Set up in the late 1990s, the IMU is listed as a terrorist group by the United States. According to the U.N., some of its leaders have held top positions in al-Qaida.