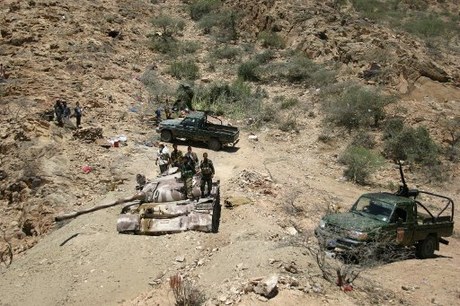 Yemen's national security chief said on Tuesday that U.S. drone strikes against al-Qaida targets will continue as the two governments keep up their counter-terrorism cooperation.

"The Yemeni-American cooperation, including the use of friendly aircraft, will continue," Ali Hassan al-Ahmadi told reporters in Sanaa.

"Yemen is one of the countries that joined the international alliance to combat terrorism after the September 11," 2001 attacks on the United States, he said.

Washington has been stepping up its support for Yemen's battle against militants of al-Qaida in the Arabian Peninsula (AQAP), which it regards as the most active and deadliest franchise of the global jihadist network.

U.S. drone strikes in Yemen nearly tripled in 2012 compared to 2011, with 53 recorded against 18, according to the Washington-based think tank New America Foundation.

At least 14 al-Qaida suspects have been killed in Yemen since December 24, when attacks by the unmanned aircraft on targets in al-Bayda and the eastern Hadramawt province were stepped up.

According to Ahmadi, "terrorist elements of around 13 nationalities took part in killing Yemenis during the past period and have destroyed Abyan province, especially (its capital) Zinjibar which was completely destroyed."

Around 170,000 people fled Abyan after the militants seized much of the province, he added.