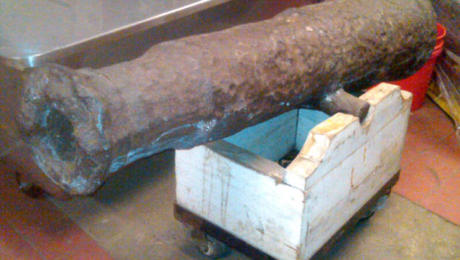 An 18th century cannon was found loaded with gun powder and a cannon ball Friday during a routine cleaning at the Central Park Conservancy.

Residual gun powder was spotted after a piece of rust was removed from the cannon, exposing the cannon ball, New York City Police said. Authorities were summoned to remove the gun powder and make the cannon safe for public display. The cannon came from a British Royal Navy Ship, the HMS Hussar, circa 1763 to 1780.

"We silenced British cannon fire in 1776 and we don't want to hear it again in Central Park," NYPD spokesman Paul Browne said.

Packing material, gun powder and a cannon ball are occasionally found inside cemented cannons when they are X-rayed during routine cleaning. A spokeswoman for the Central Park conservancy had no comment.