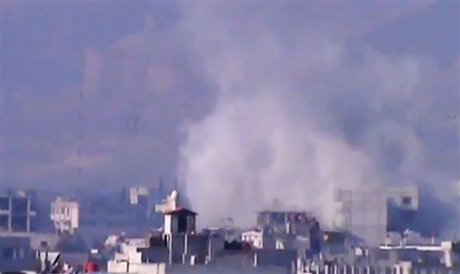 Syria's army sent shells smashing into rebel zones on the outskirts of Damascus Sunday while a Palestinian camp south of the capital was rocked by fresh fighting, a watchdog said.

The Britain-based monitoring group, which relies on a network of activists, doctors and lawyers inside Syria, also reported fierce clashes between insurgents and the army in Daraya, southwest of Damascus, and in the Barzeh district of northern Damascus.

It said fighting erupted during the night in Yarmuk, a Palestinian camp in southern Damascus, that has been the scene of violent clashes in past months, and which was bombed by regime warplanes in December in an assault that send tens of thousands of residents fleeing.

The latest fighting pitted regime troops against rebels in a firefight around a police station, the Observatory said.

Violence around Damascus has been on the rise since the army last July launched an offensive against rebels who had moved into several neighborhoods.

Analysts say the regime is attempting to secure an area of control in a radius of about eight kilometers (five miles) around the capital after it pushed rebels into outlying towns and villages.

In the northern city Aleppo, scene of some of Syria's worst violence since the eruption of an anti-regime revolt almost 22 months ago, clashes raged near an intelligence headquarters, said the Observatory.

Sunday's violence follows a day in which 95 people, among them 33 civilians, 39 rebel fighters and 23 soldiers, were killed across Syria, according to the Observatory.

The United Nations says more than 60,000 people have been killed in violence across Syria since the outbreak in March 2011 of a peaceful uprising that morphed into an insurgency after the regime of President Bashar Assad launched a brutal crackdown against dissent.