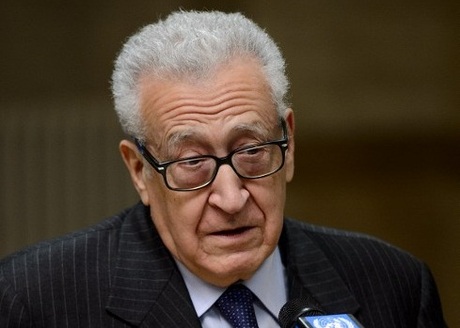 Official media in Syria renewed attacks on U.N. and Arab League envoy Lakhdar Brahimi on Sunday, calling him biased and saying his peace mission aimed at solving the country's crisis was "useless."

On Wednesday, Brahimi criticized as "one-sided" a proposal by President Bashar Assad to end the crisis, and two days later he met top U.S. and Russian officials and urged "a speedy end to the bloodshed" in the strife-torn country.

"It is clear that Mr. Brahimi is now out of the loop for the solution for Syria. He has taken sides, he is not a mediator," wrote the pro-regime daily al-Watan on Sunday's front page.

"Brahimi is incapable of finding a solution to the Syrian crisis.

"He acknowledged in his last meeting with President Assad (on December 24) that Turkey and Qatar will not stop supporting terrorist groups and that he cannot prevent them from doing so," it wrote.

"Brahimi's mission is useless, just like (his predecessor) Kofi Annan, who resigned when he realized that he had no role to play in a war waged against Syria by several Western capitals," said al-Watan.

Brahimi was appointed to replace Annan in September 2012, after the former U.N. secretary general resigned when his own peace plan failed to prevent further fighting between rebels and forces loyal to Assad.

Since the start of the uprising in March 2011, Damascus has labeled those calling for Assad's fall as foreign-backed "terrorists."

Brahimi, who last week criticized a three-step solution announced in a rare speech by Assad, "represents the Turkish, U.S. and Gulf states' position, and is not an objective mediator," said al-Watan.

After Brahimi told the BBC on Wednesday that Assad's proposal was "more sectarian, more one-sided" than similar initiatives he had made in the past official media in Syria accused him of "flagrant bias."

Assad's plan called for dialogue, but only with groups deemed by the regime to be legitimate.

The proposal was rejected outright by the Syrian opposition -- including groups tolerated by the regime -- and the West.