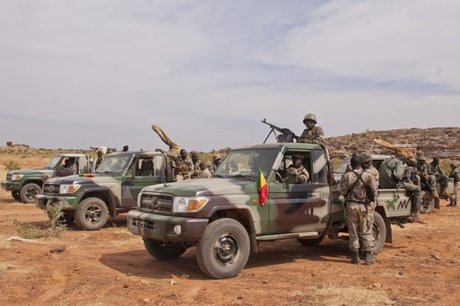 French jets pounded the Islamist strongholds of Gao and Kidal in northern Mali on Sunday, forcing insurgents to flee on the third day of a game-changing intervention that has been met with relief by the population and spurred the region into action.

Rafale fighter planes struck bases used by al-Qaida-linked fighters in Gao, the main city in northern Mali and the base from which ethnic-Tuareg rebels a year ago launched the offensive that touched off Mali's descent into chaos.

France also targeted a large base in the northern region of Kidal, a security source said, targeting an area where rebels had stocked munitions and fuel.

In addition to the Rafales, former colonial ruler France has used Gazelle helicopters and Mirage jets since it launched the operation on Friday to counter the rebel push south.

Algeria on Sunday granted France permission to use its airspace to reach targets in Mali.

Residents in Gao, which had been under the control of a group called Movement for Oneness and Jihad in West Africa, said the French airstrikes had completely leveled the Islamists' position and forced them out of the town.

"We can see smoke billowing from the base. There isn't a single Islamist left in town. They have all fled," a teacher said, speaking on condition of anonymity.

French President Francois Hollande, who has been struggling on the domestic front and whose ratings have hit record lows, said the intervention had stopped the southward rebel advance seen as threatening the capital Bamako, but stressed France's mission was not over.

Some residents of Gao rejoiced at the French strikes but said they needed friendly troops to fill the void as soon as possible.

"What we need now is for the (Malian) army to come here so that the Islamists can't come back," a young student said.

Residents of Timbuktu, which has seen some of the worst Islamist abuses over the past 10 months, said they were also eager for French jets to appear in the sky.

"The population is cut off from the south. We can't travel, it's become too dangerous," said Elhaj Cisse, a literature teacher in the ancient northern city.

"We are waiting for this French intervention. We have been living in a very totalitarian regime for nine to 10 months," he said.

In liberated Gao and Konna, "people are relieved. They have been in this situation for 10 months. We needed this spark.... Everyone is saying it, even in the mosques," another resident said.

Aides to Hollande described the militants as better trained and armed than they'd expected.

"What has struck us markedly is how modern their equipment is and their ability to use it," one said in a reference to the rebels' hit on a French helicopter, which resulted in the death of its pilot, France's only confirmed fatality.

Senior officers from neighboring countries were expected in Bamako on Sunday to prepare for the arrival of the first troops of a multinational West African force.

The force has been authorized by the U.N. Security Council to help the Malian government reclaim control of the north of the country. It will be commanded by General Shehu Abdulkadir of Nigeria, which will provide around 600 men.

Burkina Faso, Niger, Senegal and Togo all pledged around 500 troops this weekend, while Benin has said it will send 300 soldiers.

It remained unclear when any of these forces would arrive and how quickly they could be deployed to the frontline.

Media reports have said France is deploying about 500 troops in Mali.

Regional bloc ECOWAS is due to hold an emergency summit to discuss the Mali crisis on January 19 in Abidjan.

A Malian security source said leading Islamist Abdel Krim had been killed in Konna. Krim, nicknamed "Kojak", was said to be a key lieutenant of Iyad Ag Ghaly, the leader of Ansar Dine, one of the Islamist groups which have controlled northern Mali since last April.

Colonel Paul Geze, the French mission's commander, said the French contingent would be at full strength by Monday and primarily deployed around Bamako to protect the 6,000-strong expatriate community.

Since taking advantage of a power vacuum created by a military coup in Bamako to seize control of huge swathes of Mali in April 2012, the Islamists have imposed an extreme form of Muslim law in areas they control.

They have destroyed centuries-old mausoleums they see as heretical, and perceived offenders against their moral code have been subjected to floggings, amputations and sometimes executions.

In addition to the French helicopter pilot, the last few days of fighting have claimed the lives of 11 Malian soldiers, according to an update released Saturday evening.

A Malian officer in the central town of Mopti, near the front line, said dozens, possibly as many as a hundred Islamists had been killed in Konna.

Human Rights Watch, citing reports from residents, said at least 10 civilians had died as a result of the fighting in Konna, including three children who drowned while trying to flee across the Niger river.

France's intervention has been backed by the main opposition at home, by Britain, which has offered logistical support in the form of transport planes, and by the U.S., which is considering offering surveillance drones for the operation.

Its closest partner Germany has also defended France's action but has ruled out sending any troops and warned that Mali's problems can only be solved by political mediation.

They're warming up and prepping their jets for Syria.

Bringing democracy - I doubt if it can be brought in by a foreign power. No doubt, it will be better than the nutcases mascarading as Islamists. Also the Taareg issue must be resolved justly for that region to ever be stable.