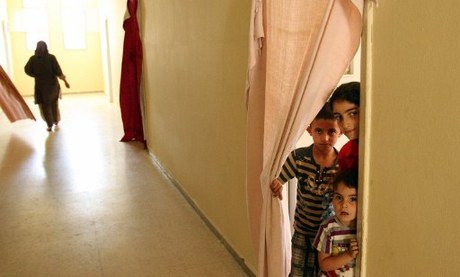 Lebanon appealed on Sunday for $180 million from Arab countries to help it meet the Syrian refugee influx that has threatened to bring the number of the displaced to 420,000 in June, as the Arab League decided to send a team to Syria's neighboring countries to assess the status of refugees ahead of a donor conference in Kuwait on January 30.

Arab foreign ministers meeting in Cairo to discuss the Syrian refugee crisis agreed to send a team to Lebanon, Jordan and Iraq "to assess the situation of Syrian refugees on the ground," the Arab League said.

The delegation is to work out the amount of aid required and present its findings to a donor conference hosted by Kuwait on January 30, the League added.

During the meeting, Lebanon appealed for $180 million to help around 200,000 Syrians and around 10,000 Palestinians who have escaped the fighting between rebels seeking to topple Syrian President Bashar Assad and government troops.

The minister warned that the influx is putting additional economic and social burdens on Lebanon. “The situation should be dealt with,” he told the Arab foreign ministers.

He reiterated that the Lebanese government is committed to hosting and protecting the Syrian refugees and would not close the border to any family escaping the fighting and destruction in the neighboring country.

Foreign Minister Adnan Mansour, who chaired the meeting, also urged Arab support for the Syrian refugees and called for assisting the Lebanese government in meeting their needs.

He cited their need for housing, education and medical aid.

The number of Syrian refugees registered in neighboring countries and North Africa has jumped by more than 100,000 in the past month to over 600,000, the U.N.'s refugee body said Friday.

UNHCR said it had registered nearly 176,600 refugees in Jordan, but stressed that the Jordanian government put the total number at around 280,000.

The 22-month long conflict has left over 60,000 people dead, according to the United Nations.

The U.N. has said it expects the number of Syrian refugees in neighboring countries will rise to 1.1 million by next June if the war continues.

Well the "Arab nations" are happy to send weapons to Syria but they can't send aid to the refugees? 400,000 palestians are in Lebanon due to Jordan's black Sunday in 1965... It led to civil war! Now 250,000 Syrians refugees are in Lebanon and we are supposed to shut our mouths and open our homes while the supporters of the war in Syria do nothing but patronize Lebanon?

Lebanon is not the "Arabs" garage! We have a responiblity to help our neighbors but we can't be expected to do it all ourselves while the rich "Arab" Bedouins support the destruction of Syria without consequence!

You're left Lebanon for Australia, and a Palestinian filled the gap you left. Where's the problem? We love everyone in Lebanon, we're not sectarians and of course not xenophobes. Unlike you.

the filthy zionist scum try to accuse patriotic lebanese of something.

This is how the money will be spent. 60.M$ for Aoun, 60.M for Nasrallah, 60.M for Berri. Zero for the refugees. They should send material, not money!

absolutely--send tents, food, and other materials to help the refugees--NOT cash. Unfortunately, this is a country where the politicians are thieves and will probably look for a way to steal any money.

the filthy zionist think that patriotic lebanese waste money like his friend siniora.

your friend berri is the biggest thief of all--how exactly did he become the biggest landowner in the south again on a government salary?

what else should we do?

the filthy zionist scum trash and filth accuses iran for something wahabis and his genocidal entity does.

the filthy zionist scum think that he can blackmail anyone with anything.