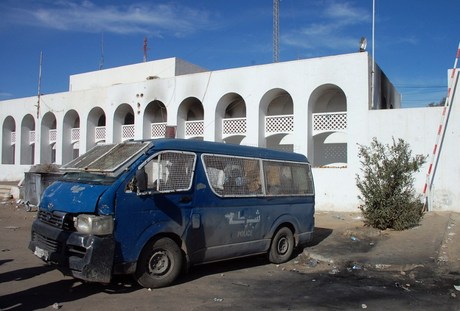 Tunisian soldiers were deployed on Sunday in a town near the border with Libya after a week of clashes between police and residents protesting over social inequalities, Agence France Presse reported.

Units from the army and national guard were sent a day before Monday's second anniversary of the Tunisian revolt that began the Arab Spring, sparked by unemployment and tough living conditions.

Ben Guerdane, around 30 kilometers (20 miles) from the border, has witnessed sporadic unrest since last Sunday, fueled by Tripoli's decision to close the Ras Jdir border crossing in early September for security reasons.

There was no sign of police on the streets of Ben Guerdane on Sunday, and no reports of clashes a day after youths set fire to the local police station for the second time in three days.

On Saturday, protesters also hurled abuse at the ruling Islamist Ennahda party, whose local headquarters were ransacked during the week. A customs office was also torched.

The protesters, who are demanding a series of development projects to revive the area's local economy and reduce unemployment, asked on Saturday that soldiers be sent in to keep the peace in the town.

Tunisia's military is better thought of by the people than the police force, which was at the heart of the repressive regime of dictator Zine El Abidine Ben Ali who fled the country for exile in Saudi Arabia two years ago.

Civil representatives from Ben Guerdane are forming a delegation to be received in the capital on Tuesday by the Islamist-led government to discuss their demands.

"The delegation will be received on Tuesday at 10:00 am in Tunis," Amar Hamdi, who heads the local branch of Tunisia's main trade union confederation the UGTT, told AFP.

Despite the border crossing with Libya being reopened on Thursday, the UGTT went ahead with a general strike in the town to demand investment and jobs, with only chemists, hospitals and bakeries remaining open.

There is ongoing social discontent in Tunisia two years after the uprising that overthrew Ben Ali, with strikes and protests often degenerating into violence.