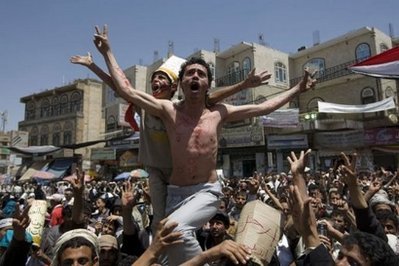 "Our revolution is a revolution of every southerner who says no to the union," chanted the crowd, as speakers called an autonomous south.

The speakers, however, did not address the issue of national dialogue, a subject that has divided factions of the Southern Movement, some of which advocate greater autonomy for the south, and others of which champion an outright breakaway.

The position of southerners is a major obstacle to the launch of a national dialogue promised under a transfer of power agreement which saw veteran president Ali Abdullah Saleh step down in February 2012 after 11 months of bloodshed.

The dialogue is intended to result in a new constitution in readiness for presidential and parliamentary elections in February 2014 that would end the two-year transition.

Several leaders of the Southern Movement have said they are ready to join the dialogue, but the hardline separatist faction of Baid has refused to take part.

The PDRY was an independent state before the unification of Yemen in 1990.

In 1994, a short-lived secession bid was crushed by Sanaa troops and since then the citizens of the south have complained of discrimination.

President Abdrabuh Mansour Hadi, himself a southerner, has set up two committees to address the grievances of southerners, in a bid to get them to join the delayed national dialogue.

One committee will be tasked with resolving disputes over land that southerners claim the previous regime seized from them, while the other will handle cases of civil servants and security officials fired from their jobs.