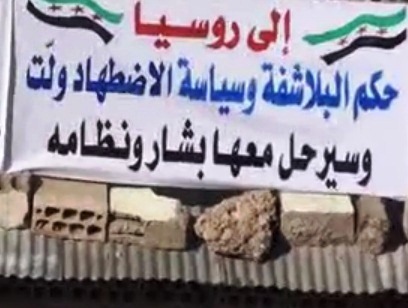 Russia said Sunday that removing Syrian President Bashar Assad from power was not part of past international agreements on the crisis and was impossible to implement, as violence across the country killed at least 100 people according to a rights group.

"This is a precondition that is not contained in the Geneva communique (agreed by world powers in June) and which is impossible to implement because it does not depend on anyone," news agencies quoted Russian Foreign Minister Sergei Lavrov as saying.

Lavrov conceded that a defiant speech Assad delivered on January 6 calling for peace in Syria on his own terms probably did not go far enough and would not appease the armed opposition.

But he also urged Assad's enemies to come out with a counter-proposal that could get serious peace talks started between the two sides for the first time.

"President Assad has forwarded initiatives aimed at inviting all in the opposition to dialogue. Yes, this initiative probably does not go far enough," said Lavrov.

"They will probably not look serious to some. But these are offers. And if I were in the opposition's place, I would present my counter-ideas about establishing dialogue."

Russia on Saturday reiterated its support for a transition plan that was agreed in Geneva on June 30 but never implemented because of the fighting.

The accord is now being heavily promoted by Lakhdar Brahimi, the U.N.-Arab League envoy for the 21-month crisis in Syria.

The Geneva deal calls for power to be handed to an interim government but offers no clear guidance about Assad's future role.

But Moscow is deeply worried that Brahimi is getting ready to back a firmer version of the Geneva pact that specifically precludes the possibility of Assad or his closest advisers serving on the transition team.

Russia argues that only the Syrian people themselves can oust Assad through either elections or some form of negotiated settlement.

Western powers and Arab states -- as well as the armed opposition -- counter that the Geneva plan promoted by Brahimi can only work if Assad steps down.

Russia's firm stance comes despite a series of recent assurances by President Vladimir Putin that Moscow was not interested in propping up Assad.

Putin even noted in his annual press conference last month that he understood Syrians' impatience for change after more than 40 years of rule by the Assad family.

But Lavrov -- enjoying unparallelled access to the regime -- argued that a broader international call on Assad to step down would have no effect on the Syrian leader and would only incite further unrest.

"If you make the Syrian president's ouster the main precondition, then -- and I have said this before -- the price for this approach is new fatalities," said Lavrov.

"And those who support such an approach must bear the responsibility for it."

On the ground, shelling targeting the town of Hazzeh east of Damascus killed at least nine people on Sunday, including a number of children, a watchdog said, as the Syrian regime pressed its offensive against rebels.

Warplanes also pounded rebel zones on the outskirts of Damascus and in the northern province of Aleppo, the Syrian Observatory for Human Rights added, giving a death toll of 100 nationwide for Sunday, including 14 children.

"At least nine civilians, many of them children, were killed in shelling on the Hazzeh area of Eastern Ghuta," it said, referring to the eastern suburbs of the capital.

Observatory director Rami Abdel Rahman told Agence France Presse that he was unable to immediately confirm how many children had been killed in the bombardment, but "at least two of the victims were aged under four."

Amateur video posted on the Internet by Hazzeh-based activists showed a young man carrying the bloodied body of a young boy away.

The grisly footage, which could not be verified, also showed other victims lying in the mud. At least two of the bodies shown were those of children.

The Observatory says more than 3,500 children have been killed in Syria since a peaceful uprising that broke out in March 2011 turned into an armed rebellion after a crackdown by President Bashar Assad's government.

Fighting also raged near the base of an army brigade tasked with protecting Aleppo airport.

Further north in Aazaz, near the Turkish border, 10 civilians were killed in an air strike, the Britain-based Observatory said.

The watchdog, which relies on a network of activists, doctors and lawyers inside Syria, also reported fierce clashes between rebels and the army in Daraya and in the Barzeh district of north Damascus.

In Jaramana, a suburb of the capital and home mostly to minority Druze and Christians, a man was killed by a shell, while fierce clashes broke out around a security building in nearby Mleha.

Violence around the capital has mounted since the army launched an offensive against rebels who moved into several neighborhoods last July.

The United Nations says that more than 60,000 people have been killed since the uprising broke out.

Bačar will be buried. That's The exit strategy.

the filthy zionist scum think they know what is understatment.

understatement is when i call you zionist scum because you are so much worse than that.

In the science of psychology, lavrov says it is impossible because he fears that indeed it is possible. You do not have to bring it up if it is indeed 'impossible'. Is time really on the regime's side? that is the million dollar question, where was the rebelion summer 2011 and where is it summer 2012 and imagine summer 2013, 14 and you will get the answer. No matter how long it takes, when the dust settles this regime is gone and the sunis of Syria will be in power whether the russians or the iranians like it or not, it is a matter of simple demographics.

Russia, behind the curve as usual.

zionists, behind the reality and sanity as usual

by this statement, Russia is advising it cannot deliver on the Geneva agreement.
this means all bets are on the table and the West is now relieved of the commitments of not supplying arms and assistance (openly) to the FSA.
what will happen now is a speedy war resulting in the partition of Syria after the destruction of most of its main weaponry such as missiles, tanks and airplanes.

the filthy zionist cannot understand that normal people have other things to do in life, but to jerk here 24 hours.

it takes me like 10 to 15 minutes daily to answer all the filthy genocidal lies and propaganda. i dont' need to be 24 hours here,

the filthy zionist scum still hallucinate what will be.