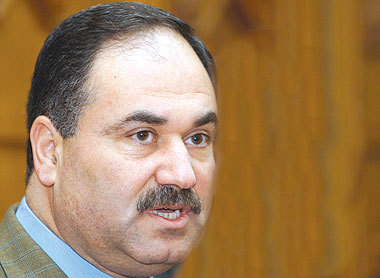 Iraq's finance minister, who has been locked in dispute with Prime Minister Nouri al-Maliki, escaped an apparent assassination attempt on Sunday when his convoy was struck by a roadside bomb.

Rafa al-Essawi's convoy had been traveling between the towns of Fallujah and Abu Ghraib, west of Baghdad, when the bomb went off at around 7:00 pm (1600 GMT), two security officials said, speaking on condition of anonymity.

No one in Essawi's entourage was harmed but some of the vehicles were damaged, the officials said.

The blast comes amid a political crisis. Weeks of anti-government demonstrations in Sunni Arab majority areas have hardened opposition against the Shiite premier.

Maliki is at loggerheads with his erstwhile government partners in the Sunni-backed Iraqiya bloc over its accusations of authoritarianism and sectarianism in the run-up to key provincial polls.

The demonstrations in Sunni areas have decried alleged misuse of anti-terror laws to hold members of the minority community, and claim Sunnis are being targeted by the Shiite-led authorities.

The premier has countered with a threat to order security forces to disperse the protests, which were sparked by the December 20 arrest of at least nine of Essawi's guards.

Essawi is a leading member of the Iraqiya bloc, which, while a member of Maliki's unity government, has called for him to quit.

The protests come with barely three months to go before provincial elections, a key barometer of support for Maliki and his opponents ahead of a general election next year.