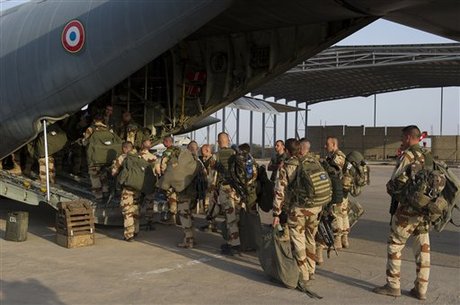 Islamists occupying northern Mali on Monday pushed further into the government-controlled south with an attack on the town of Diabaly, 400 kilometers (250 miles) north of the capital, as they have "retreated" in the east of Mali.

"The Islamists attacked the town of Diabaly today (Monday). They came from the Mauritanian border where they were bombed by the French army," said a Malian security source on condition of anonymity.

He said the Malian army had "urgently" dispatched a helicopter to the town.

A regional security source confirmed the attack, which he said was being led by Abou Zeid, a leader al-Qaida in the Islamic Maghreb (AQIM).

"They left the Mauritanian border to avoid raids by French planes," he said.

Meanwhile, French Defense Minister Jean-Yves Le Drian said Monday that the rebels have retreated in the east but French forces are facing a "difficult" situation in the west of the country where rebels are well armed.

"The situation is developing in conformity with the expectations" of French President Francois Hollande and is "developing favorably", Le Drian told reporters.

The French offensive kicked off on Friday to block the advance of Islamist forces towards the capital from their bases in the north which they have controlled since last April.

Sixty Islamists were killed in Gao alone on Sunday, according to residents and a regional security force.

French warplanes attacked jihadist positions in the town of Nampala some 50 kilometers north of Diabaly, as well as a base in Lere, near the border with Mauritania.