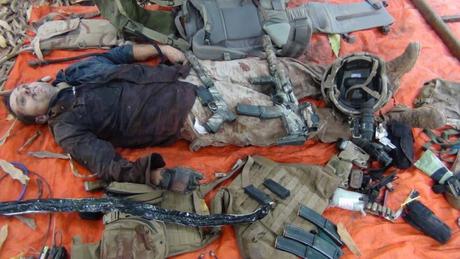 "French commander killed during botched rescue operation in Bulo-Marer," read an accompanying caption to the photo.

The picture showed the body of the alleged commander, dressed in a black button-up shirt, and khaki pants, lying face up on an orange surface next to presumably his combat gear. A small crucifix showed from his neck.

A second photo, also posted on the Shebab Twitter feed, showed the dead man in the same position but with bullet magazines and an assortment of guns and other tools of war strewn around and on top of him.

"François Hollande, was it worth it?" read a caption accompanying the second picture.

France's military operation Saturday to free a French spy held hostage by the Shebab since July 2009 was a failure, with another French soldier killed and the fate of the hostage unclear.

He did not say a commander had gone missing.

The French defense ministry had earlier on Monday expressed fears that the Somali Islamists would put on display the bodies of the French soldier and the hostage, who France believes was killed during the operation.

"All indications unfortunately lead us to believe that the Shebab are preparing to organize a disgraceful and macabre display" of the bodies, Defense Minister Jean-Yves Le Drian said.

The gruesome image recalled the incident in 1993 when the bodies of U.S. soldiers were dragged through the streets and mutilated in Mogadishu, after a battle between U.S. forces and Somali militia fighters.