Report: King Abdullah II Fears U.S. Will Ask him to Step Down 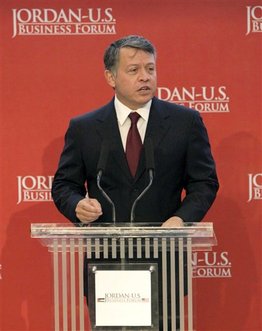 Jordan's King Abdullah II has reportedly expressed fear that the Obama administration would conspire against him and ask him to give up his powers if he doesn’t implement reforms.

Israeli daily Maariv has said that the king made the remark in a dialogue with Jewish organizations in Washington during his visit to the U.S. this week.

The newspaper quoted him as saying that he was afraid the U.S. will deal with him as it did with Egyptian President Hosni Mubarak when it asked him to step down.

Peace between Israel and the Palestinians will be sealed with U.S. help, Abdullah said on Saturday as he urged American businessmen to invest in his country.

"Jordan's commitment to the future is secure. It has driven our long work for regional peace... and with America's help, peace will succeed," said the Jordanian monarch.

He also urged U.S. businessmen visiting the kingdom to make bigger investments in Jordan, saying they should not be dissuaded by the popular uprisings that have unseated two Arab leaders and threatened others.