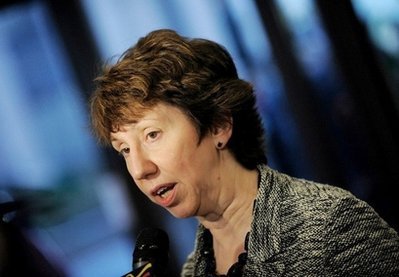 Ashton, on a visit to the rebel-held eastern Libyan city of Benghazi, is to open a European Union mission office in a city hotel later Sunday and she will also address a news conference.

She said she saw the "vision of the Libyan people today all around. I saw the posters as I came from the airport with the words 'we have a dream'."

"I am here today to explain and be clear about the depth and breadth of our support in the European Union for the people of Libya," in the fields of economy, health and education namely, Ashton said.

"This support is not just for now, but long into the future, as long as people from the country wishes us to be there," she said after meeting Mustafa Abdul Jalil, the head of the rebels' National Transitional Council.

"The people of Libya have spoken about the future they want. I am here on behalf of all the 27 countries of the European Union to offer our support to that future," she added.

In an earlier statement issued by her office Ashton said it was an "honor to meet the people who have been fighting for democracy and a better future for Libya."

Ashton will also tour central Benghazi, the epicenter of the protests against Gadhafi, and where pro-democracy demonstrations continue to occur regularly.

Her visit is a new boost for the rebels who have been lobbying world powers to formally recognize their interim council.

The European parliament has long argued for recognizing the NTC, which so has been recognized only by France, Italy, Qatar and Gambia.

Just hours ahead of Ashton's visit NATO-led warplanes struck the Tripoli port and Gadhafi's immense compound of Bab al-Aziziya near the capital.

"There were two raids on the port and Bab al-Aziziya", the residence of Gadhafi which has already been targeted several times, a Libyan regime official said about the early Sunday NATO strikes.

International correspondents were taken to Gadhafi's residence in a regime-chartered bus but were unable to access the compound.

"They're expecting new raids, we don't have permission to go in," an official said after speaking to guards outside the compound.

On Saturday NATO struck one "naval asset in Sirte" -- Gadhafi's hometown -- apart from some other military targets, an alliance statement said.

NATO took command of the air campaign on March 30 from French, U.S. and British forces, who under a U.N. mandate launched air strikes on Gadhafi forces after they began crushing a rebellion against the strongman's more than 40-year authoritarian rule.

NATO said it carried out "precision strikes" on vessels in the ports of Tripoli, al-Khums and in Sirte.

"Given the escalating use of naval assets, NATO had no choice but to take decisive action to protect the civilian population of Libya and NATO forces at sea," said Rear Admiral Russell Harding, deputy head of the NATO-led air war after the strikes.

"This has limited Gadhafi's ability to give orders to his forces. It has also constrained his freedom of movement; effectively he's gone into hiding," NATO's Wing Commander Mike Bracken said in Brussels.

Meanwhile U.S. President Barack Obama sent a letter to Congress on Friday, asking for political support of U.S. action in the NATO assault, as he hit a technical 60-day deadline to get official congressional approval for use of his war powers.

The White House maintains that its support role to allies does not merit a formal declaration of war as is required by the U.S. Constitution.

Also, African Union leaders will gather for an extraordinary summit in Addis Ababa on Wednesday-Thursday to discuss the Libyan conflict, the organization announced.

Last month, pan-African body proposed a truce but it was rejected by rebels, who insisted on Gadhafi's departure.