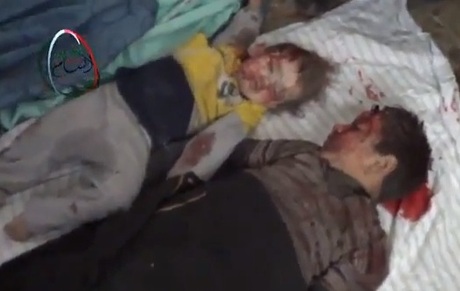 Russia said Tuesday it would be "counterproductive" to refer war crimes committed in the Syria conflict to the International Criminal Court as proposed by dozens of states led by Switzerland.

"We view this initiative as untimely and counterproductive to solving today's main goal -- an immediate end to the bloodshed in Syria," the foreign ministry said in a statement.

Switzerland sent a petition on Monday demanding referral from the 15-member U.N. Security Council -- the only body that can send the case to the ICC but where Russia wields veto power.

The letters' signatories included many European and Latin American nations as well as Australia and Japan.

Only the Security Council has the right to refer the Syria case to the Hague-based court because Syria is not an ICC member.

But Russia -- a traditional Syria ally that vetoed three prior Council resolutions sanctioning President Bashar Assad -- argued that a war crimes referral could only escalate the crisis.

"We are convinced that speculation on the subject of international criminal prosecution and a search for the guilty will only entrench the two sides' irreconcilable positions and complicate a search for a political settlement of the Syrian conflict," the Russian statement said.

Moscow also once again reaffirmed its support for a Syrian transition plan agreed by world powers in June that was never implemented because of the fighting.

That deal called for the quick creation of an interim government with full powers. But it never assigned a clear role for Assad and was interpreted differently by Russia and the West.

Russia argued on Sunday that Assad's removal from power was impossible because outside players had no right to meddle in the conflict under the terms of the June pact.

That comment and Tuesday's decision not to refer the Syrian case to the ICC are likely to further complicate Russia's relations with Western and Arab nations that view Moscow as Assad's last meaningful ally.

Yes it is counterproductive because Russia doesn't care about the deaths of Syrians. They only care about their Base in Tartous, and the potential to drill in the Med for Syrian oil.

if the syrian rebels make a good deal with bashar assad before the conflict, no syrian people die in the conflict (war ).

How can you kill a child that poor child in the picture has urinated how scared must he have been what is up with you all!!