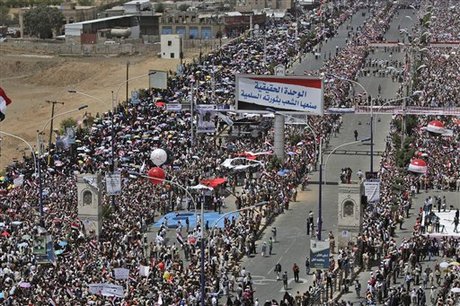 Ministers from the Gulf Cooperation Council (GCC) announced Sunday they had suspended mediation efforts in Yemen, after the country's president failed to sign a transition deal for him to quit office.

The GCC had "decided to suspend their initiative in the absence of the propitious conditions," said a statement issued from Riyadh.

Gulf foreign ministers made the decision after a meeting to discuss the crisis in Yemen, where President Ali Abdallah Saleh on Sunday backed off from the transition deal a day after his ruling party had signed up to it.

In their statement, the ministers expressed the hope that Saleh would soon sign up to the deal, which they described as "the best way possible to overcome the current situation."

Since late January, security forces have mounted a bloody crackdown on protests demanding Saleh's departure, leaving at least 181 people dead, according to a toll compiled from reports by activists and medics.

The statement from the GCC monarchies also express "their deep concern" at the way the situation was developing in Yemen, and called on its people to show "patience and wisdom" to avoid a national catastrophe.

Earlier Sunday, GCC secretary general Abdullatif al-Zayani and Western envoys were encircled at Yemen's Emirati embassy by armed regime supporters, in what seemed to be a bid to stop him reaching Saleh's palace to close the deal.

The GCC statement expressed regret at the incident.