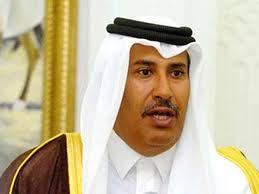 Qatar cast doubt on Tuesday over the value of France's military intervention in Mali against Islamist rebels, arguing that force would not solve the problem and urging dialogue, as the U.S. threw its support behind the French military action.

He said the Mali problem should be "discussed between neighboring countries, the African Union and the (U.N.) Security Council," adding that his government, which was instrumental in supporting uprisings in several Arab Spring nations, is ready to help in mediating a solution.

"If anyone would ask for our help, from all parts... we will be a part of the solution, (but) not the sole mediator," he said.

France launched a campaign of air bombardments on Friday to halt an advance on the Malian capital Bamako by Islamist fighters. A contingent of 750 French troops has been sent to bolster Malian forces against the rebels, who have controlled northern Mali since April.

The 15-nation U.N. Security Council on Monday expressed its unanimous support for the French offensive.

But the Organization of Islamic Cooperation, of which Mali is a member, called on Tuesday for an "immediate ceasefire, dubbing the offensive "premature" and urging all parties to return to negotiations.

Meanwhile, U.S. State Department spokeswoman Victoria Nuland said: "It's absolutely critical to stop the offensive of terrorist groups towards southern Mali, to prevent the collapse of the government, and to accelerate the implementation of the U.N. Security Council resolutions on Mali,"

"So, it's in that context that the U.S. very much welcomes the French military action in Mali," she told journalists.

A five-day old French military offensive in the West African nation has uprooted Islamist insurgents from several key strongholds as they sought to push an offensive south towards the capital, Bamako.

France is said to be planning to triple its force from a current 750 to a total of 2,500 troops, a sign that Paris is preparing for a drawn-out campaign to stem the advance of jihadists who have held northern Mali since April.

The first troops from a regional West African force were also bound for Mali on Tuesday to shore up the French and Malian government action.

Washington was already providing intelligence to the French at their request, and was now studying a request to help Paris airlift its troops into the country as well as aerial refueling help, Nuland said.

"We are looking hard today at the airlift question, helping them transport forces from France and from the area into the theater," she said.

Washington had also been in touch with a number of countries which make up the 15-nation Economic Community of West African States to accelerate the deployment of a U.N.-approved African-led force for Mali.

White House spokesman Jay Carney stressed however there were no current plans to send American troops into harm's way in Mali.

The administration of U.S. President Barack Obama is financing the measures through some existing funding, but was also planning to ask Congress to unleash more money in the current days to support the ECOWAS plans.

"The secretary did outline the support that we are prepared to offer to ECOWAS countries, as she did make clear that we support the French forces and that we are looking at how best to respond to the requests," Nuland said.

the islamis is bone to to kill that is there work; but you who kills will die one day .

Where was OIC when shrines, libraries and the resting places of Muslim saints were destroyed by the terrorist? Where was OIC and the world when they were killing, maiming and beating the Muslims in the north? Where was OIC and the world when the terrorist where plundering the homes and shops of the Muslims? Where was OIC when the terrorist where instilling fear in the people? How dare OIC say the offensive is “premature,’’ and call for “an immediate ceasefire in Mali and for all parties to go back to the negotiations. Ansar Dine, one of the fanatic armed group occupying the North of Mali, is the one who decided, on January 3rd, to withdraw its offer of a cessation of hostilities.

It took the threat of a military installation falling into the hands of the terrorist for France to take action and for the world governments to say "good job, we support you."