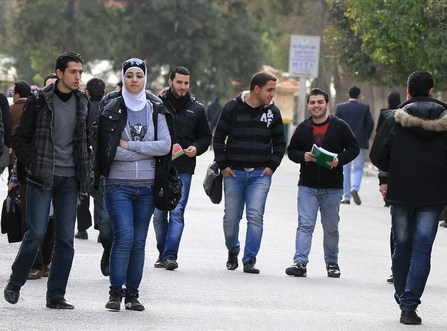 Some 670 Syrian students at British universities risk being expelled because they can no longer meet their fees due to the conflict back home, campaign organizers claimed Tuesday.

The collapse of the Syrian currency, the closure of the embassy in Britain, sanctions on Syrian banks and the Syrian higher education ministry stopping funding have made it hard for students to finance their tuition.

Some Syrian students have already been expelled or asked to pay up or leave their courses, according to campaigners who have launched a petition.

To help out the affected students, Britain's finance ministry is freeing up funds from accounts hit by the European Union asset freeze on Syrian President Bashar Assad's inner circle, said a spokeswoman from the Department for Business, Innovation and Skills (BIS), which handles universities.

Brunel University post-graduate student Husam Helmi, from outside Damascus, has lost his aunt and uncle in the conflict while his family have fled their homes.

"This is a disaster. If we don't complete our courses, we will have to pay double our entire fees when we return to our Syrian universities," he said in an email from the online campaigning community Avaaz.

"The regime in Syria is collapsing and we are stuck in limbo, we desperately need the help of the UK government to stop British universities kicking us off our courses," he added.

The petition on the Avaaz website has been signed by more than 2,800 people.

Tuesday marks 22 months since the eruption of a revolt against Assad's regime that has morphed into a full-scale civil war.

"We are aware of a number of students and universities affected," the BIS spokeswoman said.

BIS is working with other government departments "to identify ways to enable students from Syria to continue their studies in the UK.

"The department has consulted Her Majesty's Treasury about the difficulty some students are facing in receiving payment from Syrian banks through the Syrian embassy.

"HMT has issued licenses to the banks concerned to allow them to deal with funds that are subject to an EU asset freeze and transfer this into the students' personal accounts.

"Now the Syrian embassy is closed, students should apply directly to HMT for a license."

BIS called on universities to delve into their welfare and hardship funds to support the Syrian students, and said some institutions had temporarily suspended fees.