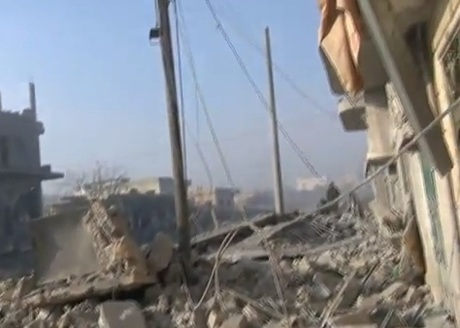 Twin car bombs killed at least 22 people in the Syrian city of Idlib on Wednesday as universities nationwide held a day of mourning for 87 people killed in explosions on the student campus in second city Aleppo.

The bombings had the hallmarks of operations staged by the jihadist al-Nusra Front, a rebel group with a strong presence on the ground in northwestern Syria and blacklisted by the United States as a "terrorist" organization.

Idlib city remains under the control of forces loyal to President Bashar Assad but most of the rest of the northwestern province on the border with Turkey is in the hands of rebels fighting to oust him.

The Syrian Observatory for Human Rights gave a higher toll of 24 dead and said most were soldiers. The Britain-based watchdog said there were three bombs in all and that many of the wounded were in critical condition.

The Observatory said the death toll from Tuesday's blasts at Aleppo University could top 100 as many of the wounded were critically hurt, which would make it one of the bloodiest attacks of the 22-month conflict.

No one has claimed responsibility for the explosions, with the government and rebels blaming each other.

Opposition activists said government jets carried out an air strike, but the army said rebels fired rockets at the campus, in a government-controlled area of the battleground northern city.

"The General Command of the Army sees in the targeting of academics, colleges and universities further proof of the killers' dark methods, and of an ideology that belongs in the past," a military statement said.

In a letter addressed to U.N. Secretary General Bank Ki-moon and the U.N. Security Council, the foreign ministry called on the international community to "denounce the terrorist massacre."

Alluding to Western support for France's military intervention against Islamist rebels in Mali, the ministry said "some countries in the world are practicing two-faced politics, by supporting terrorism in Syria and denouncing it in others."

Ban sent his condolences on Wednesday to the families of those killed and said "deliberate targeting of civilians and civilian targets constitutes a war crime."

He stressed the "urgent need for a peaceful political solution that ends the violence and meets the democratic aspirations of the Syrian people."

Near the capital, the army sent reinforcements to the town of Daraya as warplanes and rockets bombarded the rebel enclave, the Observatory said.

"The army's assault is insanely violent. The shelling is continuous, it has been so intense in the past hours. There are many injured people," said local activist Abu Kinan.

More than 60,000 people have been killed in Syria since the uprising against Assad's rule erupted in March 2011, according to the United Nations.

The Observatory said 103 people died in violence nationwide on Wednesday, including 44 civilians.

Meanwhile, the World Food Program said that it would quickly try to distribute aid to an additional one million Syrians after Damascus gave the green light for it to work with local aid organizations to reach more of those in need.

Previously most of the U.N. agency's food aid was delivered through the Syrian Arab Red Crescent, which was overstretched and only able to provide help to some 1.5 million Syrians a month.

payback for the university

Shat up Farsi BSThrower....go sell your crap in Iran.

oh yeah, blind hatred for ASSad's troops, the target were ASSad's thugs, read the article. Also, notice how the FSA takes responsibility for its attacks...had the Aleppo bombing (airstrikes from ASSad) been carried out by them they would have said so.

targeting military targets is not a war crime.

proof, other than ASSad media..?

the regime targeting bakeries, gas stations, and universities which are civilian targets is a war crime.

Agreed john but there comes a time when a dictatorship has to end and a unbiased democratic system put in place. This scum bag and his family have done nothing but suppress, torture and kill their people for almost 40 years. Enough!

Let's face it....Libya, Egypt....soon to be Syria....are going through a major political change and by no means the grass will be sprouting anytime soon. These are countries that have been suppressed for ages and know only of democracy from pictures/news/etc. of the likes of the US and West. But to expect them to go from one end of the spectrum towards the other will not happen overnight. It will be a tough uphill battle as you are still dealing with many who do not know or understand the meaning of "change". That's a human trait.

Look at Lebanon for example....you would think we are very modernized, westernized, democratic but as you can see we still have a thorn (HA) that live by prehistoric ideologies that revolves around violence, aggression and religious extremism (which they know is a strong tool to control/gain support from those who do not want change and prefer to be frozen in time).

But eventually and with the help of the younger and more open-minded generation the transition will take place whereby we will start seeing green sprouts....

Someone somewhere is making alota money off this war.

russia in selling weapons to ASSad

I was about to make that same comment Peace. Double standard as always. That's why all the crap he posts is simply.....BS. Hence the alias BSThrower!