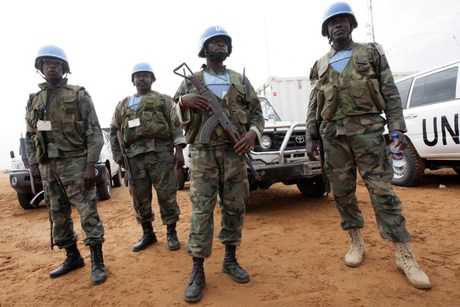 Four Chinese workers abducted by Darfur rebels on January 12 have been freed, a spokeswoman for the joint U.N.-African Union peace keeping force in the troubled western Sudan region said Wednesday.

"The four abducted Chinese workers were released and delivered to the headquarters of the UNAMID mission in the South Darfur region of Khour Abchi," spokeswoman Aicha Elbasri told Agence France Presse.

The Chinese embassy in Khartoum confirmed their release, saying it had asked Chinese nationals and companies in Sudan "to strictly comply with security measures and avoid going to unstable and dangerous regions."

The Chinese nationals along with five Sudanese workers were abducted by armed men on January 12 as they were busy with road construction in Sudan's strife-torn Darfur region.

The attackers abducted the men and seized their vehicles as they were finishing their work for the day. The fate of Sudanese hostages is unknown.

Recent years have seen a wave of kidnappings for ransom in Darfur, where ethnic rebels a decade ago launched an uprising against the Arab-dominated Khartoum government.

Early last year, rebels of the Sudan People's Liberation Movement-North (SPLM-N) abducted a group of 29 Chinese workers in southern Sudan. They were released unharmed after 11 days.

China is Sudan's major trading partner, the largest buyer of Sudanese oil and a key military supplier to the Khartoum regime.