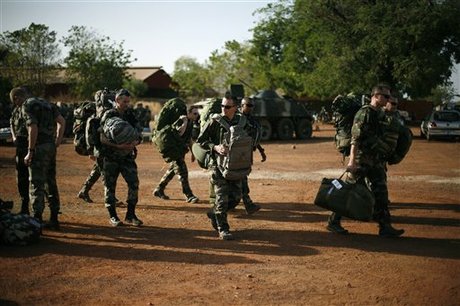 As the dramatic hostage siege unfolded in Algeria -- where extremists took hundreds captive in a gas field to retaliate for the week-old French operation in Mali, sparking a deadly commando raid -- fighting has continued unabated on the ground in Mali.

French and Malian troops scored two victories over the rebels after days of fighting in Konna, a key town about 700 kilometers (400 miles) from Bamako, and in Diabaly which is 400 kilometers north of the capital of the sprawling country.

"We have wrested total control of Konna after inflicting heavy losses on the enemy," the Malian army said in a brief statement.

Colonel Didier Dakouo, head of the Malian forces based in Sevare south of Konna told Agence France Presse his troops had "crushed the enemy."

A security source said Malian soldiers were backed by French air strikes to ease their entry into the town.

In Diabaly, which the Islamist militants had seized on Monday even as their bases were pounded by French fighter jets, local sources reported the rebels had been driven out.

"Diabaly is freed, the Islamists have left and the French and Malian troops have entered the town," said a member of the local municipal council. Her statement was confirmed by a regional security source.

The rebels' retreat coincided with a demand from veteran Algerian Islamist Mohktar Belmokhtar for talks to end the French campaign against extremists controlling the north of Mali.

Belmokhtar, a one-eyed Algerian jihadist with al-Qaida ties, has claimed responsibility for launching Wednesday's attack on an Algerian gas complex.

A source close to him told Mauritania's ANI news agency that a video would be distributed to the media proposing that "France and Algeria negotiate an end to the war being waged by France in Azawad", or northern Mali.

The French military operation started a week ago and was prompted by the fall of Konna to rebels amid fears they would push south to the capital Bamako from their northern stronghold.

The U.N. refugee agency warned fighting in the next few months could displace another 700,000 people, adding to some 350,000 already forced to flee their homes -- taking the overall number of displaced passed the million mark.

After the victory in Konna, a significant boost for the embattled Malian army, French aid group Medecins Sans Frontieres (Doctors without Borders) stepped up calls to be allowed to deliver crucial medical aid to the area.

"Despite our repeated requests, we are still being denied access to the Konna region," MSF operations director Malik Allaouna said in a statement.

Paris says it already has 1,400 soldiers in Mali, set to increase to 2,500, while regional powers have pledged some 5,800 troops for an African military force.

Spain on Friday promised military training personnel and a transport plane for African troops, but said it would not take part in combat operations.

French Foreign Minister Laurent Fabius said he would attend an emergency summit of the West African bloc ECOWAS on Saturday in the Ivory Coast city of Abidjan to accelerate the African deployment.

"I will go there with a military attache and we will see with our African friends how we can speed up the deployment of MISMA," or the International Mission for Mali Assistance, he told Agence France Presse.

Nigeria announced Thursday it would boost its troop allotment for Mali from a planned 900 to 1,200 soldiers. A first contingent of 100 Togolese and Nigerian soldiers arrived in Mali late Thursday.

In urging the Senate to approve the deployment, Nigerian President Goodluck Jonathan said: "Our national security is under imminent threat or danger as a result of the crisis in northern Mali."

Chad, which is not an ECOWAS member, has also promised 2,000 soldiers.

The crisis in Mali began when Tuareg separatists -- boosted by weapons secured in Libya -- took up arms for independence of the north last January, overwhelming the country's under-equipped army.