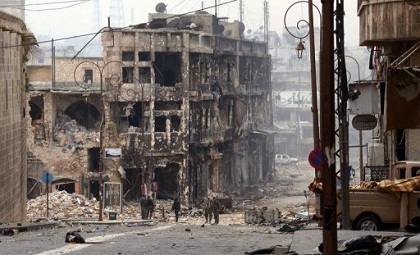 Rebels bogged down in Syria's former commercial hub of Aleppo are waging an assault on regime forces defending its international airport, seeing it as the key to seizing the whole city.

"If the airport falls, all of Aleppo will fall," said Colonel Abu Kosai, one of the rebel commanders of the multi-pronged operation against the regime base on the airport's periphery.

He explained to AFP that President Bashar Assad's military was using the airport's three-kilometer (1.8-mile) long runway to fly in munitions and supplies to its troops in Aleppo, which hold around half the city.

Cutting regime access to the airport is the most important part of a plan to cut supply routes to Assad's military. The rebel Free Syrian Army (FSA) is already keeping up pressure on roads the regime uses.

But the military is fighting back, using Russian-made fighter jets and helicopters to strike rebel positions firing on its Base 80 at the airport with Kalashnikov rifles and rocket-propelled grenades.

"We've been assaulting the base for 25 days," Abu Kosai said on Thursday, as some of his young fighters stood around in ragtag uniforms at a position outside the base.

Twelve rebels have been killed in the operation so far, he said.

But Abu Kosai expressed confidence that the 400 FSA fighters he said were involved in the operation would overcome the estimated 150 soldiers holed up in Base 80.

"In the past two days alone, five soldiers have defected," he said, adding that rebels were being careful to not fire on regime troops they thought might be escaping to the other side.

"Many of the soldiers inside want to defect," Abu Kosai asserted.

Aleppo, Syria's second city, would give the rebels a big base from which to confront the Damascus regime, and to consolidate their conquest of the largely rural north.

For months, the two sides have settled into a deadlock in the city, with shelling and lack of electricity daily features to which its remaining inhabitants have become accustomed.

The regime's big advantage is its utter domination of the skies. Aircraft bombard the rebels, and in many cases civilians.

The rebels' strategy is to rob Assad's forces of the ability to use airports and airfields in the north.

Another rebel commander in Aleppo, Major Abu Mahar, told AFP his fighters were attacking a military air field in Kuwayris, 40 kilometers (24 miles) to the east of Aleppo.

"This airport is flying helicopters and jets against us," he said.

He claimed that regime soldiers there were "very scared, and with low morale."

It was not possible to verify the situation at Kuwayris because of the threat of regime air strikes.

The military appears to have decided on a strategy to defend Syria's bigger cities, leaving the rebels to hold mainly rural areas to the north and the east of the country, and to challenge the regime on the outskirts of the capital Damascus in the south.

Assad himself has appeared confident in public, offering no concessions or talks to the rebels, whom he terms "terrorists".

We all know how this will end

It took the afghani rebels 12 years and 1 million victim to topple najibula of afghanistan. Najubula too enjoyed overwhelming soviet support, used migs, scuds etc. The regime and its allies is marketing 'there is no military solution' because the opposite is precisely true. Someone always wins at the end and it is clear that time is not on the regime's side, all bashar can do is delay the outcome and destroy Syria.