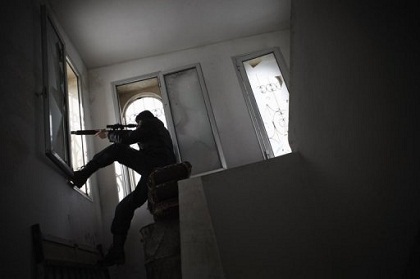 "He was killed on one of Aleppo's fronts" on Thursday, said the Aleppo Media Center, adding that he was "shot by a regime sniper."

Anti-regime activists in Aleppo posted online photographs of Debay's body and of his press card, as well as an amateur video showing the corpse.

The AMC's Abu Hisham told AFP via the Internet that he was first alerted of Debay's killing by a volunteer at an Aleppo field hospital.

Another activist who spoke to AFP via the Internet on condition of anonymity said he helped put Debay's body in an ambulance en route to the Bab al-Salama border crossing with Turkey.

"It is not exactly clear how he was killed, but it seems like he entered a very dangerous street where the army and pro-regime militia were positioned," said the activist.

He reportedly described himself as a "rebel journalist."

Debay was born in 1954 in Lubumbashi, in what was then the Belgian Congo.

He volunteered until 1980 with the ex-Rhodesian army of the white minority regime that ruled what is now Zimbabwe until 1980.

At least 17 professional journalists, both foreign and Syrian, and 44 citizen journalists have died reporting on one of the deadliest wars for the media in recent years, according to figures from media watchdog Reporters Without Borders.

another crime from the M8 backed assad regime... they bomb hospitals, kill journalists, shell bakeries... a coward regime backed by coward M8ers fearing for their privileges granted by their beloved regime....

i guess you were there too to innocent your beloved regime as usual....