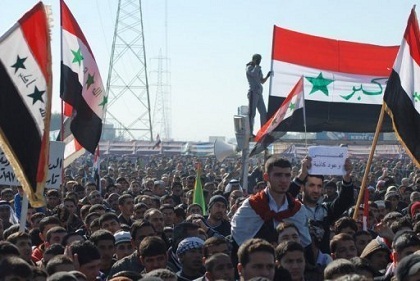 Thousands rallied in Sunni-majority areas of Iraq on Friday, calling for the ouster of Shiite Prime Minister Nouri al-Maliki in the latest of ongoing protests that have deepened a political crisis.

Demonstrators in Baghdad and other cities also demanded the reform of anti-terror laws they say are targeted at the Sunni community, as well as the release of prisoners they claim are being wrongfully held.

Friday's protests came after authorities released more than 400 prisoners, with a top minister publicly apologizing for detaining some without charge for prolonged periods, and following visits to two of the biggest protest sites by ministers.

In the capital, protesters rallied at Sunni mosques after Friday prayers in which preachers railed against the government, while demonstrators in Samarra and Mosul insisted they would continue to rally and called for Maliki's ouster.

"Do not give space to those who... want to take away your rights, even though it is their duty to protect them," said Adnan al-Naimi, an imam at the Najib Basha mosque in north Baghdad where around 400 demonstrators congregated.

Protesters, many holding large Iraqi flags and banners, shouted: "We don't want committees, we want our rights," a reference to a committee set up by Maliki to address protesters' demands, "Enough injustice!" and "Release the prisoners!"

In Samarra, thousands gathered in the city's central Al-Haq Square for Friday prayers during which imam Mohammed al-Hamdoon shouted: "They have made promises before, and they made promises yesterday, but let them hear -- we will stay, protesting, until we get our rights."

Demonstrators held up banners saying: "The people want the fall of the regime", and "Leave, Maliki, without negotiation."

On Wednesday, Iraq said it had freed more than 400 prisoners since anti-government rallies erupted last month, and Deputy Prime Minister Hussein al-Shahristani said it would press on with more releases daily.

The protests began on December 23 in mostly Sunni areas of Iraq, with the longest-running demonstration blocking a key highway linking Baghdad to Jordan and Syria.

Only a matter of time before war breaks in Iraq. Lebanon, having suffered similar sectarian injustices and assasinations in the past decade, is by no means immune either and sooner or later will be sucked into the sectarian conflict. You only have to go through comments on here to figure out that people are ready to kill each other.