U.N. ex-Official Warns of Ethnic Cleansing in South of Sudan 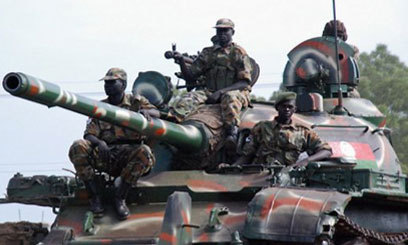 A former top U.N. official in Sudan on Friday warned that "ethnic cleansing" is going on in the southern part of Sudan, where the people are suffering from hunger, disease and bombing in two war-torn states.

Just back from a trip to Blue Nile and South Kordofan states, where conflict between rebels and Sudanese government forces has raged for over a year, Mukesh Kapila called on the international community to come to the aid of the some 1.5 million people living in these states that border South Sudan.

"The ethnic cleansing is largely complete.... Rebel areas are depopulated and largely empty," said Kapila, the former U.N. Humanitarian Coordinator in Sudan in 2003-2004.

His comments came prior to the publication Friday of a statement by anti-genocide charity the Aegis Trust, for which he serves as a special representative.

In Blue Nile, where Kapila estimates 450,000 people are affected by the conflict, fields and villages have been razed, he said, and the population is described on Sudanese radio as "black plastic bags" that must be cleared out of the area.

In South Kordofan, where as many as one million people are affected, Kapila said he saw people "living in caves and cracks and eating once every three days."

The people of the two states two states fought alongside South Sudan during the country's bloody second civil war (1983-2005). After the South seceded in 2011 fresh conflict broke out between rebels and the Sudanese government, blocking crucial aid from reaching the resource starved region.

"We saw people sitting at the side of the road, with too little energy to even become refugees, (people) who have given up," Kapila said. It is estimated that up to 170,000 people have fled the conflict and made their way to camps in South Sudan.

Kapila left his U.N. post in 2004 -- before the partition of Sudan -- after speaking out on "genocide" in Sudan's western state of Darfur, where the U.N. says an estimated 300,000 people were killed by Sudanese forces and allied militia.