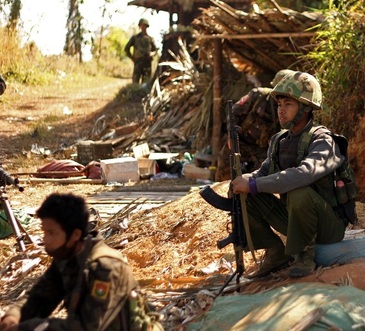 The clashes came despite a new offer by President Thein Sein of peace talks to end Myanmar's last active civil war, which has marred widespread optimism about the regime's dramatic political reforms.

He said the military was battling to retake control of a strategically important hilltop just several kilometers away from the KIA headquarters in Laiza, and was using artillery shells and ground forces.

"They want to take all their artillery on the hilltop and then they will immediately do something to occupy Laiza," he said.

The government announced on Friday that it would end a military offensive against the Kachin rebels with effect from Saturday morning, but within hours the KIA reported coming under fire again.

The government pledge came amid growing international concern about the use of air strikes in the conflict, although there have been no reports of further air raids since its ceasefire vow.

The Kachin rebels have not announced any ceasefire of their own, saying the regime is just trying to deflect international criticism. They say any negotiations should also address their demands for greater political rights.

In a speech to local civil society groups in Yangon on Sunday, Thein Sein said the military was trying to be patient with the rebels. He said his government was ready to hold peace talks with the Kachin.

"Based on international experience, it usually takes decades to build peace. During that time, clashes often flare up and down. But we will solve the problem at the table without betraying the peace process," he added.

Tens of thousands of people have been displaced in Kachin state since June 2011, when a 17-year ceasefire between the government and the KIA broke down.

The total number of casualties is unknown, but the government said Friday that 35 soldiers had been killed and 190 injured in a series of ambushes by the rebels since 2011.

The KIA said last week that three civilians were killed in an artillery attack by the military on Laiza. The government denied the allegations.

Myanmar's quasi-civilian government has reached tentative ceasefires with a number of major ethnic rebel groups since taking power in early 2011, but several rounds of talks with Kachin rebels have shown little progress.

"We are still trying for both sides to meet," said local businessman and peace negotiator Yup Zaw Hkaung, who confirmed the fighting was still ongoing.

State media said Sunday a government peace committee had sent a new invitation to the KIO to hold peace talks. There was no immediate response.