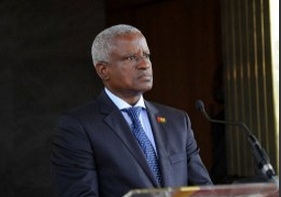 Guinea-Bissau's interim President Manuel Serifo Nhamadjo said a general election planned for May after a 12-month post-coup transition would be "impossible".

"It was planned that at the end of the transition, there would be general elections in May 2013. That is impossible. Technically there are still a lot of things to do," Nhamadjo said in remarks published in local media on Monday.

He said the situation had been explained to regional leaders during an Economic Community of West African States (ECOWAS) meeting in Abidjan on Saturday.

"Everyone understood the difficulties we are facing and approved our proposition to push the elections to a later date," he said, without giving a new date for the poll.

He said preliminary steps to be taken to organize the elections include "biometric registration, which requires external financing".

Guinea-Bissau has been led since May by a transition government, which took over after a coup a month earlier which interrupted a presidential election between the first and second rounds of voting.

In December the National Electoral Commission estimated a revision of the electoral code, biometric registration and 30 million euros ($39 million) were needed to hold a credible election.

Many of Guinea-Bissau's partners suspended aid to the chronically unstable nation after the latest coup. Since independence from Portugal in 1974, conflict between the army and the state has meant no president has ever completed a full term in office.

Coups, counter-coups and regular assassinations have also made the unstable nation an attractive destination for South American druglords seeking a hub to move cocaine into Europe.