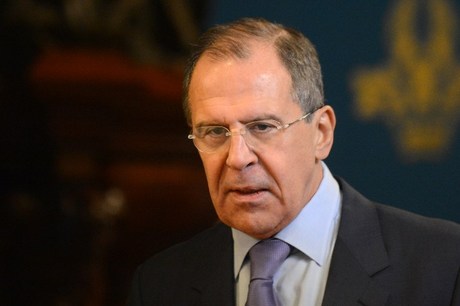 Russian Foreign Minister Sergei Lavrov on Wednesday lashed out at the Syrian opposition for its "obsession" with toppling President Bashar Assad which he said was holding up peace efforts in the country.

"For now, everything is running up against the opposition's obsession with toppling Bashar Assad's regime," Lavrov told reporters at his traditional start-of-year news conference.

"As long as this irreconcilable position remains in place, nothing good can happen. Armed actions will continue and people will die."

He said that the opposition's insistence on ousting Assad was thwarting efforts to find a diplomatic solution backed by the former international peace envoy Kofi Annan and his successor Lakhdar Brahimi.

Lavrov took particular aim at the Syria National Coalition -- a broad-based group backed by the West founded in Doha last year -- for seeking the toppling of Assad as one of its fundamental aims.

Over almost two years of conflict that the United Nations estimates has already cost more than 60,000 lives, Russia has cooled on Assad but has vehemently resisted Western pressure to call on him to quit.

"Our priority is not reaching a geo-political aim -- like the toppling of the Assad regime -- but a stabilization of the situation and a rapid end to the bloodshed to save Syrian lives," said Lavrov.

His comments came a day after a top Russian official raised the prospect of a protracted conflict in Syria in which neither Assad nor the rebels would gain the upper hand.

"The situation can develop in different ways. I think it could become protracted in nature," Deputy Foreign Minister Mikhail Bogdanov said.

lol...russians are obsessed not by the deaths of people but by keeping their economic and military ties with syria, that s all! so they ll do everything to keep bashar in power

You make it sound like Syria is a very rich country. Russia cannot live without it. Russia stuck to its ally to show that it is a superpower not a rubber stamp for the west.

Yea if anything peace can say that about America n Bahrain.

as usual you post has nothing to do with my comment, just so you appear smarter and spread your M8 hezbi propaganda...

you are pitiful in your rage to defend a regime that harmed lebanese more than israel ever did and never shot a bullet to liberate its land which you dare call a resistant country LOL!!!!

"a handful of pricks" is that what you nasrocrap supporters call the intellectuals of a country who have been forced out of their homes by the ASSad regime? figures on how much you value intellect and intellectuals...you sheep!

really? many of them are more educated than you will ever be so I don't expect you to understand.

doreed lahham is not ruling Syria nor is he a politician. Again don't mix things up if you do not understand them.

evidence he is not lebanese

"it took you four hours to come back with this empty talk?"

i have a life mowaten... i don t stay behind my keyboard like you...

The guy is getting weirder every day

the Russians are out of touch with reality and consider their wishes for realities.
what happened to their statement they are with what the Syrian people wants?
anyways, since 2 years, each day this regime has been loosing ground, and as long as it lasts, ultimately, the Syrian regime will go.
nobody can pressure the FSA anymore after they captured already enough arms and ammunitions to last several years.

Dear Lavrov, the days of 99% election wins and other similar fraud is over. Assad should have recognized the wind of change and moved on. The Baath party raped and pillaged Syria, Lebanon and more recently Iraq for many years. As well as instigated animosity between the Palestinians all to serve its own goals.

Yes the regime still has supporters but lost its legitimacy a long time ago when they turned the revolution into an arm struggle. The people rose up, armed themselves and fought back. Today we see Al Qaida taking advantage of the situation which is not good for anyone.

I agree with u. The only problem is that al-Qaida minded groups are not taking advantage of the situation, but are leading it. They are the one making the military gains. What happens when the dust settles?

Bashar is done. Even he knows that I'm sure. I'd say he's fighting for the best possible position in a hoped-for settlement in the end. But his days and the days of Ba'ath rule are over now.

So what is all the killing for now? A gadafi style video if bashars death?

so who is in charge of M8 Sunnis?
who is Salman Franjieh in charge of?
What about Asim Kanso and his thugs?
who makes the decisions? Berri/nasrocrap/aoun/ who exactly?

like we always said, farsis will never reach the mediterrenean...the line from teheran baghdad damascus hizballah is all infected..... and lavrov is just holding to tartous/bashar.even lavrov's compatriots are fleeing from beirut because damascus airport is under '"renovation".

where do you get your news from? zbale! understand the difference and contrasts between democracy, communism, dictatorship, tyranny, capitalism...you can't just pretend you understand them just by using them

I agree the actors who are running the show in Syria are the Saudis, Qataris, the Ottomans, who are after northern Syria, and the US. No problem in financing neither to recruit mercineries who do not know whom they are fighting for and why.

roar, what is your point exactly? That you call garbage men zbale? I respect them for doing their work.
back to FT I called him that because he has no idea what he's talking about in the paragraph above.

This is all a chess game. Russia is standing firm with its last ally in the Middle East as it did with its last ally in Europe (Slobodan Milošević). At the end, all these killers will be in trash dump of history. Russians are no good. They are evil spirited people, even the layman among them. They were a superpower once and let's hope they will never be again. America is God's greatest nation on earth, and that's just simply a fact.

WRONG! Flamer- China's economy is far better than the US at the moment. That's why the US owes them trillions you idiot! this clearly proves you don't mean what you say. You are a paid propogandist!

the filthy zionist scum, while critising russia, ignore situation in his own genocidal entity, where it doesn't really matter who is prime minister because they are all genocidal

the filthy zionist scum talks about farsi this farsi that, and no one buys his stupidities

patriotic lebanese tries to have a decent conversation with zionist scum still not realizing that only language they understand is the language of rockets.

That has got to be the most idiotic justification of communism and dictatorship I have ever heard! If you truly beleive what you are saying, (I don't belive you do because I beleive you get paid to come out here and spread propoganda)then you deserve to be ruled by the likes of Assad with his foot on your neck day in and day out. However, just because an idiot like you wants that, it does not mean the rest of us deserve it.

the filthy zionist scum hallucinate about reason for emigration.

another evidence that he is not lebanese.
lebanese people know everything about emigration

lol!! and you said that nothing was going on in syria and that the regime had everything in control... so in control they hire women in paramilitary units now! hahahaha!!!!

trying to be smart mouwaten? mou hek?
LOL.... your beloved bashar has not enough men to do the job properly that he has to hire women... only a sign of his desperation... in a few weeks he ll hire children too...

first you oust bashar and his baathist regime that M8 is so proud of... then you deal with the new gvt if they are worse than bashar.... but you do not encourage a regime that harmed so much lebanon that it lead it to the crisis it is facing now...

so in your logic if islamists you do not agree with were fighting against israel you would support the gvt of israel! lol!!!!

compromise the baathist way will always result in a win lose situation. you cannot compromise with the devil. bashar has gone too far in massacres, and the west too shy to support the rebels, that they paved the way to extremism which unfortunately is the consequence. but how can they stay silent when their own army and country bombs them in total indifference of the world? how can they stay silent when their gvt treats them like enemies and do nothing against israel for decades?

just be indifferent to his BS like i am...

Assad will be hanged whether you like it or not Lavrov. Suck on that!

peace, allouchti, gabbaguybo666, my compatriots of March 14 and Lebanon First Some Twenty-Two Damn Years Late and Still, the Russians are unaware that Assad is gone already just as Dr. Arreet 7akeh had continuously predicted that he would in 2012 and that he kept telling his followers at their numerous Symposiums of Drs. Arteena Satleh! Where do these Russians live, my friends? peace, gabbaguybo666, allouchti, March 14, Lebanon Unranked As Of Yet, get ready to get together, get set and go, go, go, go, go pray for these Russians to come back to reality! wlak min addak ya 7ak...awati? Happy New Year and hope the Assad regime MIGHT fall again in 2013 and then again n 2014 and 2015 and 2016 and... every year afterwards.

honestly wheter bachar stay or leave . whether they succeed in their revolution or they go through the hell of a civil , it is a good lesson the syrian people is learning . maybe now they can understand what we went through in lebanon . Half our nightmare was cause by us , at least we have the courtesy of welcoming them in lebanon and not interfering officially in their private matters . We cant say they did the same to us . They use to laugh about us , and terrorise us . Make judgement about our "opinionated " people . Laugh about how we fought each other , and thank the stability the assad regime brought them . I remember a syrian telling me that bashar started as a WARITH ( a heir) and became a ARISS ( a groom) for the syrian people . This was one year before the arab spring , and he meant every word .

oh they are definately eating their words right now.

Nice comment, but I say Assad deserves what he's getting bcos of all the things he did to lebanon

Can i please get a thumbs up if you think that BSflamer is an idiot.

the only idiot is you under 100 nicknames

Chinas economy is not "better" than Americas. Ppl don't go to America to vote for their senator. They go for either economy or safety. In America your investment, or property is still safer than any other place in the world thanks to their army, not their form of government.

Btw the bill of rights is a huge factor for America's freedom, I wish our leaders would adopt it.