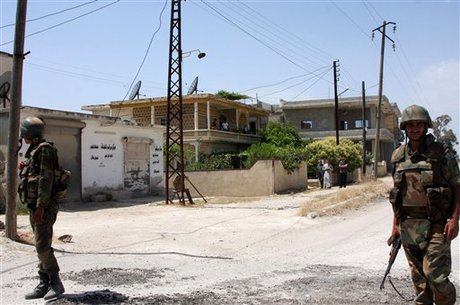 Syrian authorities have called for "million man prayers" at mosques on Friday to appeal for the re-establishment of security in the country, ravaged by 22 months of bloodshed, a minister said.

"Prayers will be held after Friday services in Syria's mosques with the appeal for a return to security and safety in the homeland," Minister of Religious Endowments Mohammed Abdel Settar said in a statement.

Syria "will prevail against the conspiracy launched by hostile states, carried out by their proxies and slaves, and led by Wahhabi infidels from abroad," he said in the statement released Thursday by state news agency SANA.

Wahhabism is a strict form of Sunni Islam practiced mainly in Saudi Arabia.

Syrian authorities have consistently labeled the uprising against President Bashar Assad's regime as a "conspiracy" backed by the West, Saudi Arabia, Qatar and Turkey.

The anti-regime revolt, which broke out in March 2011 as a peaceful uprising and morphed into an armed insurgency under brutal repression, has killed more than 60,000 people, mostly civilians, according to the United Nations.

This regime is living in an alternate universe. It had a chance to respond to the people demands but used force in criminal force against unarmed protesters provoking this bloody war. All of this so an inept person can stay at the helm. Indeed, the emperor has no clothes.

"Syria "will prevail against the conspiracy launched by hostile states,"

the same old propaganda used by all dictatorships in the world when they face a trouble or to justfy its crimes: "a conspiracy from abroad targeting a regime who is nice to its people!"
staline used it , hitler used it, and all the other dictators used it!

why don t you go and live in syria as a faithful baathist defender you are? seems the country of your dreams so assume and go and live under you beloved bashar s democracy...

you praise a system that prefers to use its army and heavy weapons against civilians instead of pointing them at israel!! you are pitiful in defending such a coward fascist system...

poor mowaten ... i never defended saudi arabia, we cannot say the same for you and your beloved baathist syria!!! you are ALWAYS here to defend bashar!!! see the difference? so you d better read before saying stupid things...

but maybe it s too much asking from a blinded hezbi you are....